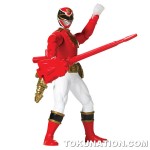 Protect the earth with the Power Rangers 6.5” Morphin Ranger figures!

Battle Morphin Ranger Figure (Spring 2013)
Keep villains away by unlocking a cool battling feature using the innovative joystick technology on the back. As seen in the TV series, this superhero includes unique gear and he is ready for training and battling. Place your thumb in the joystick and wield the Ranger’s weapon for the ultimate 360-degree control of movement!

Ultra Morphin Ranger Figure (Fall 2013)
Keep villains away by morphing your Ranger to Ultra Mode, just like in the TV series. With the simple push of a button on the back of the figure, your Ranger will morph into a more powerful Ultra Mode and release a blast of light from his armor. With these incredible features at your fingertips, evil won’t stand a chance!

The diligent minds at Linear Ranger’s Toy Grid inform us that the first wave of Power Rangers Megaforce toys are hitting shelves- just in time for the holiday shopping season! :D

With thanks again to Linear Ranger and special congrats to member LordZedd08 for finding these new releases! 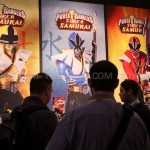 Thanks and shout out goes to Brian for taking these high res shots! There’s more, check everything out after the jump! 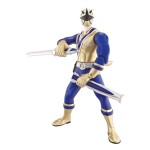 The official images of Bandai’s 6.5 inch sized Power Rangers Samurai figures have been provided by Bandai and are now available here at TokuNation.com!

The Power Rangers Battle Morphin Figure is ready to protect earth from evil! Keep villains away by unlocking a cool “morph” feature using a joy stick featured on the back of the figure. Utilizing cool toy technology this superhero is posed with unique battle gear ready for training or battle. Place your thumb on the back of the figure in the joy stick dial and wield the Ranger’s weapon with complete control in any direction! As seen in the TV series, this weapon action enables the Rangers to protect earth, and now you can practice training moves with your own Ranger! Available in 4 Ranger colors this Fall

Check out a ton of high res Power Rangers Samurai images from Bandai at Toy Fair 2012!

The stuff we’ve really been waiting for since ToyFair began!!!

Courtesy of the ToyFair attendees among our news staff :)