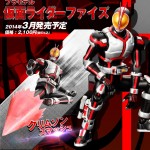 The images gives us a  closer look at the accessory count and both will include a display stand. Faiz’s phone will be able to flip out and convert from phone and gun modes but even more shocking is that Kabuto will include the Kabuto Mizer, a weapon that both versions of his Figuarts missed.

In addition, Kabuto’s image gallery has all but confirmed that we’ll be getting a Dark Kabuto version.

Both kits are still scheduled to come out in March, with Faiz retailing 2000 yen and Kabuto costing 2300 yen.