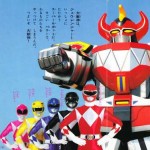 Straight from the just concluded Shout Factory SDCC panel we have a huge official announcement from the company. A complete series release of Kyoryu Sentai Zyuranger, fully subbed, is happening!

That’s right folks, the show from which Mighty Morphin Power Rangers drew it’s source material will be released on a complete series DVD set with full subtitles! And chances are that with Shout Factory’s history of including incredible extras, this set will have some great surprises! When asked about the release itself Shout Factory’s Brian Ward confirmed that this was Saban Brands idea. So this came directly from them, as in Saban approached Shout Factory about putting this release together.

While at the panel we also asked about the black sheep of the Saban Tokusatsu family, Mystic Knights of Tir Na Nog. This often forgotten but excellent series is a personal favorite of mine and I was curious as to whether it could ever see a release. Brian Ward put it this way, there are legal rights issues to releasing certain series such as Mystic Knights and he went on to specifically mention that Masked Rider falls into that same category. The rights for shows like this don’t necessarily sit in Saban Brands hands, but that doesn’t necessarily mean that they won’t happen.