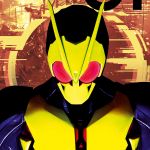 All this week we have been sharing exclusive cover reveals from Titan Comics‘ Kamen Rider Zero-One Issue 03 which releases in February 2023.  We are excited to share with you now the final cover from Issue 03, the Photo Cover or “Cover C” in retail lingo.  Check out all the details of the issue below!

You can pre-order the issues at the links below!