Thanks to a pair of new listings posted on Toywiz we have our first looks at two as of yet unannounced new items for Power Rangers Beast Morphers. Both Zords are of the “Converting” variety. So these are the combining zords meant to go along with the upcoming Beast-X Megazord components!

Next, we have the Gold Ranger’s Beast Wrecker Zord! While the Toywiz listing doesn’t have an official description yet, it’s apparent what we’re getting from this release. This Beetle Based zord converts from insect to mechanical crane truck mode and can also combine with the Beast Wrecker or be used with the other 4 Zords to create the Beast-X Ultrazord! This Zord is also listed at $29.99 with a September release.

When a proper description arrives for the Beast Wrecker Zord we’ll be sure to update this story. Hopefully the reveal of these two zords also means that official images of the Beast-X Ultrazord won’t be far behind either.

Our good friend @MisturYellow on twitter originally discovered these listings. 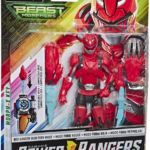