The exciting premiere of Akibaranger Season 2 has given us a close look at some more upcoming Super Sentai SH Figuarts!

First up are the remaining members of Zyuranger and Jetman, followed by the introduction of Dairanger and Hurricane Red!

Keep in mind this is just a promotional tease; any release dates are unconfirmed and all products are subject to change.

Thanks to Decade for the heads up

Thanks to the ever insightful DrillBIT we have news of the forthcoming S.H. Figuarts for Akibaranger season 2!

First we have confirmation via a Bandai press release that S.H. Figuarts Super Akiba Red will be released in June, priced at 3675 yen! His teammates Akiba Blue and Akiba Yellow are tentatively set to be released in July for the same price.

Also revealed via this pdf were the Japanese release details of S.H. Figuarts Dragonranger and Tyrannoranger from Zyuranger! It is assumed both will have some relation to the Akibaranger figure releases, however what exactly this will be is currently unconfirmed. Dragonranger is tentatively due for release in June, while Tyrannoranger will be released the following month in July – both again priced 3675 yen.

Finally DrillBIT brings us some unconfirmed news of other Figuarts seen in the Akibaranger PV seen at today’s press release. Among those seen were Black Condor and Blue Swallow of Jetman, Deka Yellow of Dekaranger and Bouken Pink of Boukenger! This is the first news of a Blue Swallow figuart, and the first news of a release date for Bouken Pink (who has been seen alongside her team members at various events).

In non-Figuart merchandise news, a Twitter user has leaked that Malshina’s MMZ will be released, and is named the MoyaMoya Z-Cune. However further details are still unconfirmed.

You can check out images of the three Akibaranger Figuarts after the jump!

As fans go forward with collecting, there is a progressive amount of stuff found to collect. Perhaps you wanted to go beyond mass produced toys, and wanted to buy prototypes? Luckily for us, in this day and age, prototypes/testshots and what have you, are usually readily available for auction on the internet. While some may refrain from buying these, these auctions at least give us images of toys before production. Sometimes these toys change by final production, sometimes they just aren’t produced at all due to cancellation. With that said, sometimes online auctions are our only glimpses at “what could have been”.

So on this rainy day lets take a look at some select Power Rangers prototypes on ebay:


As alluded to before, maybe you don’t want to buy these, but just want to see how these toys were before final production? If that’s the case, we’ve mirrored the images from the aforementioned auctions. Note: most of the links are to private auctions. Sellers include gmlenterprises, lawijki & mj_var. Click on the headline to check them out!

US Tamashii Nations distributor Bluefin have announced via their Facebook page that they will be bringing the Tamashii Web exclusive Black Condor SH Figuart over to the US!

The popular character from Chojin Sentai Jetman will be released in November, priced at $43.99.

Thanks to TokuNation.com member Rider Strike for sharing!

Bandai have recently updated their Tamashii webstore with new images for their exclusive offerings for October. Among the S.H. Figuarts figures for this month include the Virgo Horoscope from Kamen Rider Fourze, buddyroid Chida Nick from Tokumei Sentai Go-Busters and Black Condor from Chojin Sentai Jetman. 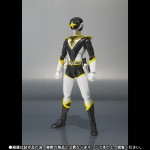 Today it was revealed that S.H. Figuarts Black Condor from Choujin Sentai Jetman is going to be a Tamashii Web Exclusive. Orders are live as of May 25, 2012 at 16:00 JST.