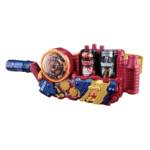 Similar to last years’ Kamen Rider Snipe Episode Zero mini-series, Kamen Rider Build will be giving the same treatment to none other than Night Rogue!

Simply titled Rogue, this new mini-series will focus on Gentoku Himuro with his aide Nariaki Utsumi, as well as Souichi/Blood Stalk making appearances. We can also see from the brief trailer Toei has released that the Kaisers from Heisei Generations Final will make a cameo as well. From the looks of the special it appears we’ll mostly be getting insight into the events of the 10 years which preceded the TV series, including Gentoku’s exposure to Nebula Gas and subsequent assumption of the Night Rogue identity.

Rogue begins with the first Kamen Rider Build Blu-Ray Set which is due for release on March 28th! 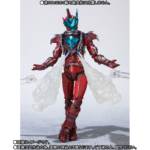 As a natural follow up to S.H.Figuarts Night Rouge, we now have confirmation that S.H.Figuarts Blood Stalk is coming our way who was discovered thanks to some data mining from Twitter user @_Erasu. Further release info is pending, but for now, we do know that he’ll include some nice steam effect parts as part of his accessory count.