Thanks as always to our friend Erasu, we’ve come upon that time of month when new official images being to drop. Ahead of the official listing pages for both figures, we have our first looks at the official pics for S.H. Figuarts Crow Amazon as well as S.H. Figuarts Kamen Rider Amazon Neo Alpha!

While we’ll have to wait until tonight for the full listings to go up, these initial images do offer us our first look at these highly anticipated releases. Crow Amazon doesn’t appear to come with any unique accessories, while Neo Alpha comes with his machine gun arm attachment. We’ll know later tonight what the specific release details and parts breakdowns are for both of these figures. 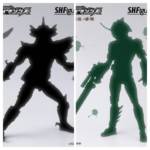 It seems that our belief in Amazon continues to breathe new life into the figure line as well. Up until this point the last Figuarts release for Amazons had been Season 2 Alpha. As of today however, Bandai has officially begun teasing out the release of S.H. Figuarts Crow Amazon and S.H. Figuarts Kamen Rider Amazon Neo Alpha! Teaser images were released through the official Figuarts blog.

Both figures have so far only been teased in silhouette form, but we suspect with the theatrical release of the Amazons Movie just around the corner, that these teasers will be fully revealed soon. As more news and information about these potential releases is made public, we’ll be sure to update you.

As we approach the theatrical release of the Kamen Rider Amazons film on May 19th, a new trailer has just dropped. Giving us our first full length look at the film and a glimpse of it’s plot. However the biggest reveal of the trailer is in fact the brand new rider featured in the film! Kamen Rider Amazon Neo Alpha, as implied by the name, corresponds to Chihiro/Amazon Neo and is based on that suit design.

Given the nature of repaints in the Amazons franchise, would it likely to expect an S.H. Figuart of Neo Alpha at some point? Time will tell. If so, you can bet we’ll be here to report it!