7 years ago, the original S.H. Figuarts Amazon was released, we reviewed it in 2016. Looking back now, that Amazon is an extremely dated figure. Even though for it’s time it was a fantastic addition to any collection, today Bandai spoils us with so much more. Just released this month is the long awaited modern update for Amazon, S.H. Figuarts Shinkocchou Seihou Kamen Rider Amazon!

The Shinkocchou Seihou subline has thus far been excellent, there’s no way to diminish how truly wonderful it’s been. But Amazon really ratchets things up. This is by far my favorite release in the line thus far, and one that really goes the distance to recreating the suit and character to near perfect detail. An excellent looking figure at the very least, Amazon also has a wealth of articulation that the original figuart lacked. While it may lack something in the accessories department, there’s no doubt that this is the definitive figure of Kamen Rider Amazon!

You can enjoy 70+ images of Shinkocchou Seihou Amazon after the jump by clicking “Discuss on the TokuNation Forums” at the bottom of this post. Coming up soon, a fresh batch of galleries from Ex-Aid, Build, Amazons, and W! 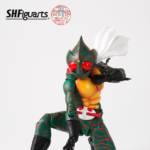 From the @t_features twitter account, Seihou Amazon will be on display beginning tomorrow (March 31st) at the Akiba Showroom. This fact combined with the new official image released, would definitely add up to this figure receiving confirmed release details in the immediate future. The clock is ticking now, we should have concrete information on this incredible release soon! 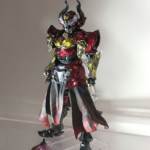 The much anticipated and teased about Tamashii Nations 2017 is finally here, and we’re kicking things into high gear with a plethora of new reveals for Ultraman and Kamen Rider.

We have new S.I.C too with the next batch of Kamen Rider Gaim S.I.Cs on display: Lord Baron, Baron Lemon Energy Arms, Kamen Rider Marika, and Ryugen Yomotsu Heguri Arms are present. Finally, Tamashii Lab’s next product was revealed to be a replica of Anhk as a floating arm.

Tamashii Nations will be an ongoing event, so there’ll be more announcements over the course of the weekend. So stay tuned, we’ll continue to provide more info as it’s made avalaible. 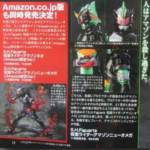 We have officially entered the Armor Zone people! This marks our 3rd full gallery from the fantastic Amazon Japan series Kamen Rider Amazons. This week saw confirmation of yet another figure from the show with the Mole Amazon, and Season 2 is well under way with an exciting 2nd episode. So at long last we’re going to take a look at the other sometimes heroic but often savage rider from season 1 with S.H. Figuarts Kamen Amazon Alpha (Amazon JP Edition)!

Amazon Alpha (Jin Takayama) was definitely not what you’d call a traditional hero. By the end of season 1 he resembled more of a villain than anything thanks to his obsession with the Amazons. But that doesn’t detract from his magnificent design, or this figures. This release of Alpha, like the Omega we recently looked at, was an Amazon JP release that included some bonus flame effect parts. But even without those, Alpha is a fearsome figure that brings the character’s savage personality to life in your collection.

We’ve attached a number of images to this post, but you can view 70+ images in our full gallery by clicking “Discuss on the TokuNation Forums” at the bottom of this post. We’ll be switching gears after this and going back to another personal favorite series of mine, with a gallery from Kamen Rider Drive!

END_OF_DOCUMENT_TOKEN_TO_BE_REPLACED

Amazon Sigma had been revealed previously at Tamashii Nations 2016, but this set of official images gives us our best look at the figure yet. Unlike the previous two Amazons releases (Alpha & Omega), Sigma actually includes a recolored Tamashii Flame Effect set already. Rather than it being a pack in for the Amazon.JP edition as with the other two. However Sigma is also a Tamashii Web Exclusive which may be a bummer to some collectors.

S.H. Figuarts Kamen Rider Amazon Sigma will be release in July 2017 for 6696 yen. Be sure to get in touch with your favorite middleman or web exclusive service soon to secure an order for one!