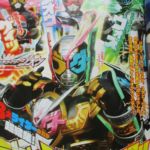 A new round of magazine scans has provided some details on the upcoming adventures of Kamen Rider Zi-O!

Here is a quick rundown on The King Of Time’s upcoming adventures:

*The traveling treasure hunter, Kamen Rider DiEnd returns! Once again DiEnd is out to gather the rarest items in the world- which in this case means the RideWatches!

*To stand against the growing power of their enemies, a truce must be made between the 3 Time Riders- Kamen Rider Zi-O, Kamen Rider Geiz & Kamen Rider Woz. When their hearts and minds are one, a new hero is born: Kamen Rider Zi-O Trinity! This new Rider Fusion has access to all the weapons & abilities of our heroes.

*Finally, one more Another Rider has been confirmed and this one is very familiar: Another Agito is reborn! To stop this threat, Kamen Rider Agito returns to battle, alongside a squadron of Kamen Rider G3 Police Riders.

Continuing Amiami‘s coverage of the recent Kanazawa Palace Exhibition is a selection of Kamen Rider figures from both Bandai and Medicom!

From Bandai there was a display of the forthcoming SH Figuarts Kamen Rider Odin and Kamen Rider Wizard Flame Dragon, as well as the recently announced first appearance Kamen Rider Ichigo and Shocker Combatant.