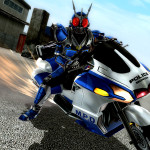 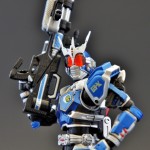 Originally released four years ago in 2010, Kamen Rider G3-X (from the era of Kamen Rider Agito) manages something that a lot of the older S.H. Figuarts do not – it stands the test of time! Featuring the old waist and diecast metal feet, these older features actually work quite well for this figure which many refer to as the RoboCop Terminator. The Cerebrus Gun comes included with Kamen Rider G3-X, as well as the Unicorn, Scorpion, and Guard Acceler accessories.

For a more in-depth look at this figure including 40 total images as well as a small review, click the “Discuss on TokuNation forums” link and share your thoughts! Thanks again to EntertainmentEarth.com for sponsoring this gallery!

Of course the month isn’t complete without a few old favourites, and so December will see reissues of S.H. Figuarts Kamen Rider G3-X and Ultra-Act Ultra Father.

Don’t miss your second chance to grab these figures! 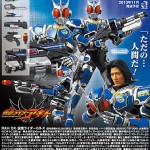 G3X will be shipping in November, retailing for a whopping 22,050 yen! Features a swappable Makoto Hikawa head in addition to G3X’s standard weapons: The GX-05 Cerberus in both deployed and suit case mode, the GX-06 Unicorn Combat Knife, The GM-01 Scorpion pistol, the GG-02 Salamander Grenade Launcher and the GS-03 Destroyer.