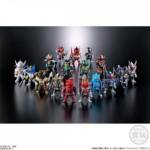 Much like the Ryuki set released earlier this year this massive 18-figure set will cover all the main characters from Kamen Rider Den-O pricey 14,000 yen and will be released in February. 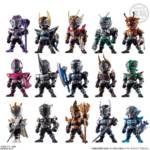 Included in the set are:

While shown, the Alternatives, default Ryuki, and default Knight do not appear to be included with the set. None the less, the Kamen Rider Converge Ryuki Complete Edition will run you 12,000 yen and will see release in July, pre orders are set to begin March 3rd. 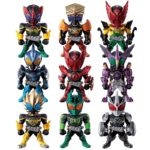 This particular page includes PB05, PB06, and PB07 all in one package, which will contain all nine of Kamen Rider OOO’s main Combos, going in order of the image:

Each figure will have a separate gimmick that will allow for the more random Combo changes. The Kamen Rider Converge OOO Combo Change set will be released in January 2017, retailing for 8100 yen. 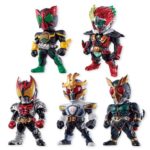 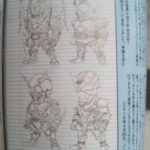 While Tamashii Features might be dying down, the latest scans of Figureoh magazine have teased Series 4 of Kamen Rider Converge.

While there’s no release info as of yet, we know from preliminary sketches that Series 4 will include: Kamen Rider Blade, Joker Undead, Another Agito, and finally Hibiki.

Stay tuned and we’ll bring you more info on this set as it’s been announced. 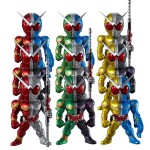 Continuing on with the Kamen Rider W theme of Converge, two new Premium Bandai sets have gone up for pre order.

First, we have the Converge Kamen Rider W Max Edition a set that contains Cyclone Joker, Heat Metal, Luna Trigger and a separation gimmick which allows them to be combined into any of Double’s 9 alternate combinations.

The second one is the FFR set, which contains Cyclone Cyclone and Joker Joker from W X Decade Movie Taisen, though the pictures don’t indicate if this set retains the half change gimmick.

Either way, both sets will be released in September, the W Max Edition will retail for 6,480 yen while the FFR W set will be slightly cheaper at 1,899 yen. 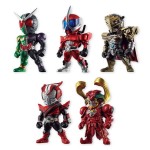 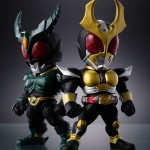