**This gallery qualifies you for an entry in our Toku Toy Box giveaway! Check out the official rules to see how!

The first new gallery tied into our very recently announced Toku Toy Box 2017 giveaway is here! Dating back to 1982 TV Special “Birth of the 10th! Kamen Riders All Together!!” is the very first Showa movie rider, Kamen Rider ZX. Largely forgotten for many years, ZX’s  appearances have been somewhat sporadic and brief since his inception. He has however enjoyed cult popularity in the Kamen Rider Spirits manga for some time. ZX actor Shun Sagata even managed to finally reprise his role as the character in 2014’s Heisei Rider VS Showa Rider: Kamen Rider Taisen!

This special double sized gallery not only takes a look at S.H. Figuarts Kamen Rider ZX, released just over 4 years ago now, but also his Rider Machine S.H. FIguarts Helldiver! Which itself was only released this past month. That’s quite a bit of time separating a rider and ride, so we figured it was best to double up and give you a comprehensive look at both!

We’ve attached the full 80 image gallery to this post, but you can also read an extensive review of both ZX & the Helldiver by clicking “Discuss on the TokuNation Forums” at the bottom of this post. We’ll be posting another brand new Toku Toy Box gallery this weekend as well. 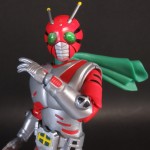 Thanks to an anonymous poster on 2Chan, and our friend @GIGABEETLE on Twitter, we bring you some in hand images of the upcoming release of SH Figuarts Kamen Rider ZX!

Check out 14 images of this good looking figure by clicking the title bar!

Tamashii Nations’ Facebook page has been updated with the list of new releases for December 2013. Two of the recently-announced Kamen Rider SH Figuarts have been selected for US distribution!

Kamen Rider ZX will be sold for 36.99 and Alternate Zero will cost 35.99. An excellent opportunity for American collectors!

Bandai’s Tamashii Nations website has uploaded official image galleries for it’s forthcoming November releases and the first among them is none other than S.H. Figuarts Kamen Rider ZX!

The star of the 10th anniversary TV special “Birth of the 10th! Kamen Riders All Together” comes packaged with the Cross Shuriken, Focus Bomb and Micro Chain as well as the usual array of alternate hands. He will retail for 3780 yen. 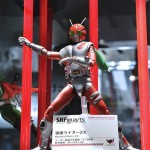 This time, we’re given a better look at the recently announced S.H.Figuarts Kamen Rider ZX!

His release information has also been fully disclosed: S.H.Figuarts Kamen Rider ZX will retail for 3760 yen with an expected release date of November. 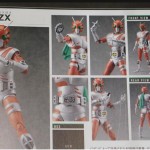 While he was a preview for Tamashii Features vol. 6, S.H. Figuarts Kamen Rider ZX has been fully revealed in this magazine scan.

Price and release date are TBA 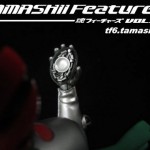 as another preview from Tamashii Nations for Tamashii Feature’s 6, they have shown up a teaser for what appers to be an S.H. Figuarts Kamen Rider ZX

Those itching for a Complete Selection ZX Belt, Toeihero.net has announced the next best thing is coming.

An adult scale prop replica ZX Belt will be released this November. Pre orders will be going up in July 1st and a custom display pedestal will be included