**This gallery qualifies you for an entry in our Toku Toy Box giveaway! Check out the official rules to see how!

The first new gallery tied into our very recently announced Toku Toy Box 2017 giveaway is here! Dating back to 1982 TV Special “Birth of the 10th! Kamen Riders All Together!!” is the very first Showa movie rider, Kamen Rider ZX. Largely forgotten for many years, ZX’s  appearances have been somewhat sporadic and brief since his inception. He has however enjoyed cult popularity in the Kamen Rider Spirits manga for some time. ZX actor Shun Sagata even managed to finally reprise his role as the character in 2014’s Heisei Rider VS Showa Rider: Kamen Rider Taisen!

This special double sized gallery not only takes a look at S.H. Figuarts Kamen Rider ZX, released just over 4 years ago now, but also his Rider Machine S.H. FIguarts Helldiver! Which itself was only released this past month. That’s quite a bit of time separating a rider and ride, so we figured it was best to double up and give you a comprehensive look at both!

We’ve attached the full 80 image gallery to this post, but you can also read an extensive review of both ZX & the Helldiver by clicking “Discuss on the TokuNation Forums” at the bottom of this post. We’ll be posting another brand new Toku Toy Box gallery this weekend as well.

Kiriya Kujou. Liar, coroner, Bugster, Kamen Rider. Has there been a secondary character that’s grown more memorable and beloved by fans of a rider show more quickly than him? Almost from the moment he stepped on screen, people fell in love with this two-faced hero. While Lazer has an unconventional Level 2 Rider form, it has a charm all it’s own. After patiently waiting since his appearance early on in the series we can finally share a full review & gallery of S.H. Figuarts Kamen Rider Lazer Bike Gamer Level 2!

Lazer Level 2 is an unconventional form for a rider, and a unique Rider Machine, but one that’s been perfectly executed. Capturing Kiriya’s iconic Level 2 form, this figure has been given an exquisite paint job to sell all the right details. But perhaps the best thing about this release is the two Gamer Drivers that are included! One, a standard Gamer Driver with removable Bakusou Bike Gashat, and the other is a “stunt” driver. Based on the type of stunt prop used for action scenes this slimmed down Driver provides some extra clearance for any rider ally. Did I mention that Ex-Aid looks absolutely excellent on Lazer as well?

We’ve attached the full gallery of 60 images to this post, but you check out our full review as well by clicking “Discuss on the TokuNation” Forums at the bottom of this post! We have more Kamen Rider Ex-Aid galleries on the way, but next time we’ll be back with another glimpse into Kamen Rider Kabuto!

The butterfly effect of Bandai’s premium & popular Shinkocchou Seihou sub-line of Figuarts has finally reached Rider Machines! While not officially labeled as an S.S. release, the brand new S.H. Figuarts Hardboilder is undoubtedly a renewal meant to replace the original release of this bike.

Hardboilder is of course the faithful ride of Kamen Rider W, and a perfect companion piece to the Shinkocchou Seihou W Figuart released last year. While this renewal definitely won’t be as significantly different from the original as many others have been in recent years, it is on the whole a more accurate and well proportioned update.

We’ve attached a selection of images to this post, but you can see the full 40 image gallery after the jump. Just click “Discuss on the TokuNation Forums” at the bottom of this post. We’ll be back soon with a brand new gallery from Space Sheriff Gavan!

Believe it or not, the Jungraider should be familiar to many people whether they’ve seen Amazons or not. And that’s because this bike is part of Bandai’s long tradition of recycled old suits and props. In fact the Jungraider was made from Kamen Rider Gills very own Gills Raider! So the figuart is no different, it’s an excellent remold of the Gills Raider, released nearly 7 years ago! But that’s not all, the Jungraider also includes the last couple pieces of Amazon Omega’s arsenal, the Battler Grip Sickle & Battler Grip Whip! This is a truly interesting release that will compliment any Amazons collection.

Both of these releases are slated for release in April 2017, as Tamashii Web Exclusives. The 2-pack of Super-1 & V-Machine features a re-release of the Super-1 figuart that appears mostly unchanged from it’s original single release. The single pack version of the V-Machine is fairly bare bones and only includes the usual wheel base pedestal.

Thanks to an updated front page on the Tamashii.JP site, we have our first look at a pair of upcoming Rider Machines, S.H. Figuarts V-Machine & Hardboilder!

V-Machine is a long overdue release for Kamen Rider Super-1 who’s been without his bike for several years. The Hardboilder is likely a new mold proportioned to the recently released Shinkocchou Seihou Kamen Rider W figuart.

While neither of the item pages are active yet for these releases, this is our first official confirmation that they are on the way. We’ll update you with full official images and information once they’re available, so stay tuned! 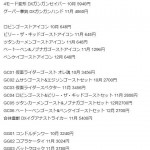 The news just keeps rolling on in for Kamen Rider Ghost! Thanks to The Ghouly News Tumblr we’ve been alerted to some new listings Rakuten just put up for the series. Much of what’s present has already been confirmed thanks to the show news revealed in the last 2 days:
DX Roleplay
DX Ghost Driver (October) 7980 yen
“4-modes” DX Gangan Sabre (October) 5940 yen
“Gupa Gun” DX Gangan Hand (November) 4860 yen

Interestingly several of the Ghost Change Series figures look to include 2 of Ghosts’ Souls  in each set, and at least some of the Eyecons themselves appear be sold in this manner as well. As more information becomes available we’ll be sure to keep you informed!

More news for the 17th Heisei Kamen Rider series is rolling in and now we have concrete pictures and info! The following images give us our first clear look at Kamen Rider Ghost’s series logo. One which looks to incorporate further the overall Eye gimmick of the Ghost Eyecons.

Additionally we have some first looks at Ghost’s toyline. Up first is a silhouetted image of the secondary rider for the series, Kamen Rider Specter! This image also confirms the name of this series gimmick line (ala Arms Change or Tire Koukan). Ghost’s line is known as Ghost Change! Specter is labelled as GC03 which is telling. Kamen Rider Ghost Ore Soul and at least one of his alternate forms will be released first with Specter up after that!

Which speaking of we also get a look at GC01 Ghost Orel Soul while riding his VERY unorthodox Rider Machine. That’s right, a multi-piece combining machine, this year we have the Iguana Ghostriker! The combination of a black and very skeletal horse-like bike and a literal ghost ship! When the 2 combine together it’s clear where this machine get’s it’s name, as combined they form a giant robot Iguana! These images also offer a clear look at the very first DX Ghost Icon! The DX Ore Eyecon is Ghost’s default Eyecon that allows him to access his standard Ore Soul form.