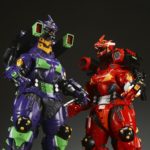 Bandai continue to gear up to the release of Shin Godzilla (aka Godzilla: Resurgence) with yet another entry into the growing collection of Godzilla x Evangelion merchandise. The Premium Bandai web store is now taking preorders for a 30cm Series 2002 MechaGodzilla (also known as ‘Kiryu‘) in Eva Unit 01 (purple) and Unit 02 (red) colours!

These large and highly detailed vinyl figures each come with different weapons backpacks – Unit 01’s is based on the version from Godzilla x Mechagodzilla while Unit 02’s is from Tokyo S.O.S. They are also only for the most dedicated of collectors, with a hefty price tag of 29,160 yen each.

Both figures can be yours in November 2016. Be sure to check out the full image selection after the jump!

This bad boy is of course based on Kiryu/Mecha G’s appearance in the film Godzilla: Tokyo SOS. S.H. Monsterarts Kiryu/Mecha Godzilla High Mobility type will be released as a Tamashii Web Exclusive in October for the whopping price of 12, 960 yen. 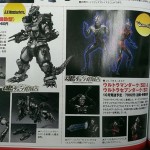 This pack features Ultra-Seven Dark & Ultraman Dark as they appeared  in Ultraman Ginga . This set appears to include the standard accessories of at least Ultra-Act Ultra Seven Renewal and possibly those of Ultraman Renewal as well. On the confirmed side of things this set will be a Tamashii Web Exclusive for October, 7992 yen.

And then there’s yet another rendition of the mighty S.H. Monsterarts Mechagodzilla/Kiryu figure! A brand new High Mobility Type version of this iconic beast, to be released as a Tamashii Web Exclusive in October for 12,960 yen!