It’s that time again friends! A few weeks back we took at the fantastic new Space Squad release of Gavan Type G. This figure was a long overdue renewal that helped set the stage for the original Metal Hero himself to also receive this treatment. In this case though S.H. Figuarts Space Sheriff Gavan came packaged in a massive set with his unique ride the Saibarian!

Gavan like Type G really needed this renewal treatment. The old Gavan body was a pretty poorly made figure with numerous documented QC issues. While these new releases haven’t been perfect on that front, I’m looking at you chrome finish, they are above and beyond functionally better figures than the old releases. Gavan comes armed with 3 versions of his iconic Laser Blade as well as 4 sets of hands and a Laser Scope head. But the biggest and best accessory is of course the Saibarian! This long overdue bike is a top notch figuarts vehicle. Functionality it can fully transform, it’s got several tamashii stage ports built in for action shots, and despite being plastic, it has some decent heft to it. It’s a shelf presence.

The entire gallery of 150 images is attached to this post but feel free to  “Discuss on the TokuNation Forums” at the bottom of this post to read the full review and accessory breakdown as well! Next up on our gallery schedule is S.H. Figuarts Alien Metron from Ultraseven! 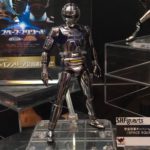 Hot on the heels of the Gavan/Dekaranger Space Squad movie announcement is a brand new revel for Metal Hero collectors. Possibly to coincide with the upcoming films’ release is S.H. Figuars Space Sheriff Gavan Type G (Space Squad)! Pictures from the C3Tokyo event, and this figure, come via Figsoku.

We don’t currently have any confirmed release details for this figure. What we can tell you is that a renewal of the Gavan S.H. Figuarts mold was first revealed way back at Tamashii Nations 2014. Though it never actually saw release. This film may finally be the excuse Bandai needed to release the renewal Gavan body, with Type G beating out original Gavan. 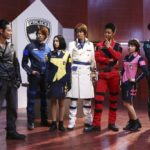 First off, we have SPD teaming up with the Space Sheriffs in Space Sheriff Gavan VS Dekaranger with actor Yuma Ishikgaki returning as Geki Jumonji/Gavan Type-G.

Secondly, we have Girls in Trouble Episode Zero which will feature an all female cast and will serve as a prequel for the big team up movie. Both movies are currently slated for release sometime in 2017.