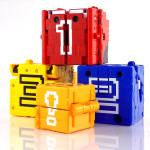 TokuNation finally has the chance to present a long overdue gallery for the 4oth Super Sentai, Dobutsu Sentai Zyuohger! The show is just about a month in and we’ve liked what we’ve seen so far, now we turn out attention to some of the first releases from the shows toyline with DX Zyuoh King & DX Cube Kirin!

While this series blocky designs and simplicity have been a big turn off for many fans the show is undoubtedly fun. As for the toys looks can also be deceiving. While simplistic each Cube Animal has it’s own charm. The Cube Eagle, Shark, & Lion that make up Zyuoh King may not appear to be much individually but when taken together it’s impressive to see how Bandai incorporated the Cube form, animal mode, and the mechanisms necessary to form Zyuoh King in each of them. Cube Kirin is a pint-sized addition meant to arm up your Zyuoh King with it’s bazooka form. Not much on it’s own, it’s a nice accessory to Zyuoh King.

We’ve got over 50 images of DX Zyuoh King as well as 20 more of DX Cube Kirin waiting for you after the jump. Just click “Discuss on the TokuNation Forums” at the bottom of this post to see them all. 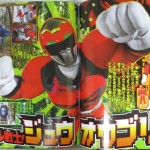 The latest round of magazine scans gives us a quick look at the future adventures of Dobutsu Sentai Zyuohger!

*Centerpiece of these new scans is the mighty Zyuoh Gorilla! Yamato befriends another stranded Zyuman by the name of Larry and learns to bring out his inner power through the VISOR UP technique, transforming into a super-strong Red Ranger!

*With new abilities comes a new weapon: Cube Gorilla! The 6th Mecha is armed with a powerful cannon to fight off Deathgaliens and can combine with Cube Tiger and Cube Elephant to form the mighty Zyuoh Wild!

While Yamato trains, the remaining Zyuohgers continue to explore the human world- and hopefully learn more about the mysterious “bird-man” that gave Zyuoh Eagle his powers. What will they find along their journey? Stay tuned to Tokunation as we keep you up to date on all details for the 40th Super Sentai Series! 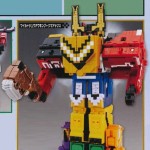 Well that didn’t take long! Doubutsu Sentai Zyuohger is only one episode in and already we have the official reveal of it’s first Premium Bandai Exclusive! In honor of the special “Instinct Awakening” abilities each of the 5 Zyuohger possess, a Sentai Hero Vinyl SP 5-Pack is being released!

This set features each of the 5 Zyuohgers transformed into their Instinct Awakened state. So that means new hands for Tiger & Lion, new feet for Elephant, a dorsal fin for Shark, & Zyuoh Eagle features his wings as well as the inclusion of his signature Eagriser! A Hero vinyls each of these figures will stand just over 6″ (160 MM) tall.

Pre-Orders for the Zyuohger Sentai Hero Vinyl SP set will open on February 15th and remain open through March 31st, with an actual release of the set in June. Premium Bandai retail price for this set will be 8100 yen. Be sure to contact your preferred middleman service today to reserve an order! 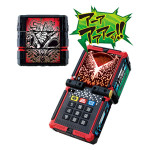 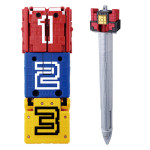 It’s the start of a new month and the official Bandai website has just updated it’s release schedule for February with Doubutsu Sentai Zyuohger! First up we have official images and release info for the DX Cube Animals releasing this month: 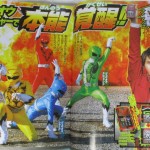 With the 40th Super Sentai Series drawing closer and closer, a new round of magazine scans offers us even more information about the heroes of Dobutsu Sentai Zyuohger!

*The four Rangers of Zyuland (Sera, Leo, Tusk & Amu) along with Yamato of Earth are drawn together by an artifact know as the Link Cube– a device that opens the connection between their worlds. The Link Cube identifies true Champions and gives this team the power to henshin, and also allows the Zyumans to obtain human form (athough they retain some animal characteristics).

*The scans provide several excellent shots of ZyuohKing in combat, and demonstrate future combinations with the various Zyuoh Cubes.

*This seasons’ method of monster-growing is revealed as well: The female Deathgalian, Nalia inserts an item called a Continue Medal into a defeated warrior, activating the second round of the Blood Game. 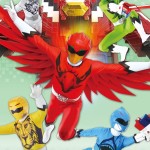 The official TV-Asahi page for the 40th Super Sentai Series, Dobutsu Sentai Zyuohger has been opened! This gives us a plethora of new information about this upcoming series!

First off, a basic story outline has been posted:
Zyuland, a world parallel to ours, is attacked by aliens, the Deathgalian. Four of its inhabitants (called Zyuman), Sera, Leo, Tusk and Amu call for help a young man from our world, Yamato. After taking human form, they all five form the Doubutsu Sentai Zyuohger!

Rounding out the primary cast is Susumu Terajima, a veteran actor who will play Yamato’s uncle- an animal sculptor.

Last but CERTAINLY not least, we have learned the production crew for this new series!
*Zyuogher’s head writer is Junko Komura, previously the secondary writer for Kaizoku Sentai Gokaiger and Unofficial Sentai Akibaranger.
*The series’ main director is Takayuki Shibazaki, whose resume includes Kamen Rider OOO, Kamen Rider Drive, Tokumei Sentai Go-Busters and several others.
*Primary action director for Zyuohger is Hirofumi Fukuzawa, a long-time stunt actor who portrayed the Red Ranger in nearly every Super Sentai from Gaoranger to Gokaiger.
*Finally, the main producer is one Takaki Utsunomiya, veteran of Kamen Rider Wizard and Ressha Sentai ToQGer.

Definitely looks like a promising team for the 40th anniversary! Stay tuned to TokuNation as we keep you up to date on all Zyuohger details!