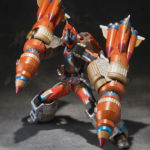 We took a short break but now we’re back with out first brand new gallery of 2018! At both the beginning and end of last year, we really opened our Amazons with 6 galleries from the hit series. Alpha, Omega, Jungraider, Sigma, Mole Amazon, & Neo. To kick this year off we’ve decided to start with a gallery of the Amazon Japan exclusive edition of S.H. Figuarts Kamen Rider Amazon New Omega!

New Omega is Haruka Mizusawa’s upgrade from the 2nd season of Amazons, and the first true upgrade for any of the riders in the show. Using the new Neo Amazons Driver, Haruka’s traditional Omega suit gets retrofitted with cybernetic parts that give him a wild and unfinished look that’s really striking. This Amazon JP edition of the figure includes all the of the standard accessories like the Neo Blade arm, an Amazons Syringe, and two sets of hands, but also comes with the exclusive Green Tamashii Flame Effects!

We’ve attached the full 50+ image gallery of Amazon New Omega to this post, but you can also check out our full review of the figure after the jump. Just click “Discuss on the TokuNation Forums” at the bottom of this post to be taken to the full thread. We’ll be back later this week with a full gallery & review of S.H. Figuarts Takeshi Hongo! 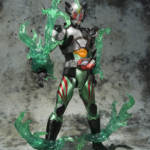 S.H.Figuarts Amazon New Omega is slated for November 2017  release with two variants having been confirmed: the one released at mass retail for 5,500 yen while the green effect parts shown in one of the images will be an Amazon Japan online exclusive for 7,020 yen.

It should be noted that Amazon Japan does offer international shipping for select items and collectibles. Though whether or not a middleman will be required for New Amazon Omega remains to be seen.