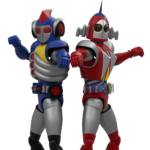 Bu Toys facebook page has updated with a selection of new official images for their upcoming Space Ironmen Kyodain figures! Three of these images have been posted so far showing off what the finalized figures will look like. Two of them feature Skyzel & Grounzel with their specialized weapon hands.

Bu Toys own account has also responded to a collector and confirmed the rough price of these figures. Skyzel & Grounzel will retail for $1250 HKD each or about $160 USD. However Bu Toys has also confirmed that they dont currently have a US distributor for these figures either.

We’ll keep you up to date as production of these wonderful figures progress forward, and as possible US distribution is made clear. 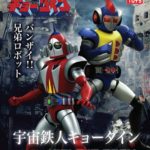 After teasing them over a month ago, Bu Toys has just fully revealed their upcoming Space Ironmen Kyodain figures!

Based on the 1976 Shotaro Ishinimori live action series Space Ironmen Kyodain (Uchuu Tetsujin Kyodain) an updated version of these characters made an appearance in the Kamen Rider Fourze Movie: Space, Here We Come. Bu Toys however is giving the hardcore collector what they want with these roughly 7.8″ (200mm) scale figures of the original Skyzel & Grounzel as they appeared in the classic TV series.

If you’re an obscure tokusatsu fan (like me) this is definitely an exciting announcement. We’ll keep you informed as release info becomes available for these figures!