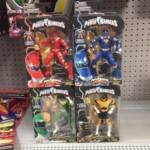 The next series of Legacy Power Rangers 6.5″ Figures have been spotted and purchased at a Wal-Mart in California. Dino Thunder Red Ranger, Dino Thunder Blue Ranger, Zeo Green Ranger, and Zeo Gold Ranger were spotted and purchased which has given a sigh of relief to collectors who thought the metallic wave of Mighty Morphin Power Rangers Legacy figures had pushed back the release of these highly anticipated figures.

Sadly, there’s been a large fan backlash against Bandai America for the quality of this wave of figures. If you look closely at the pictures, you will see a majority of the “gold” pieces, including the entire armor of the Zeo Gold Ranger, have been unpainted and instead are the flat, matte gold which looks more orange than gold. The same plastic can be seen as the holster for the Dino Thunder figures as well as the Build a Megazord pieces of the Zeo Megazord.

We reached out to Saban Brands for a comment but they have not responded at the time of this article. We will keep you updated with any info that comes across.