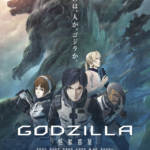 The King Of The Monsters lives again!

After premiering in Japan late in 2017, Polygon Pictures has brought their new Godzilla film to audiences worldwide thanks to the power of Netflix!

Godzilla: Monster Planet is the first ever animated film featuring the legendary monster, and is set in a world where kaiju have ruled Earth unchallenged for thousands of years.

Monster Planet is the first in a planned TRILOGY of animated Godzilla movies! Be sure to check out Godzilla’s latest adventure and stay tuned to TokuNation for all monster news! 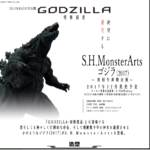 TOHO Animation has released a teaser trailer for the previously-announced Godzilla anime project.

Officially titled Godzilla: Monster Planet, this new feature-length project tells the story of humanity returning to a world ruled by Kaiju after thousands of years.

Developed by Polygon Pictures and written by Urobuchi Gentaro (who most fans may recognize as the mind behind Kamen Rider Gaim), Monster Planet will be released in Japan on November 17, 2017. Polygon also plans to make the film available worldwide through Netflix at a later date.