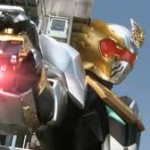 Here’s our first sneak peak at the Fall episodes of Power Rangers Megaforce!

A short clip was revealed for those who bought the SDCC Exclusive Gold Gosei Morpher, card P-092 which comes with said Morpher unlocked this scene showing a brief and short clip of Robo Knight battling a Toxic Beast from the episode The Last Laugh.

You can view the clip below:

Special thanks to Rangercrew/Fury Diamond and Tokunation member raz for giving us the heads up!

The good people at Henshin Grid have taken a closer look at the two upcoming Power Rangers board games set for release in the near future.

Trivial Pursuit also holds a multitude of questions from all seasons, with some answers provided by members of the “Power Force” fan-group.

Originally set for release this summer, both games’ release dates have been downgraded to “Coming Soon.” Stay tuned for further details! :) 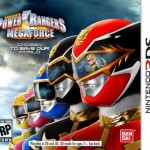 Last week was the Electronic Entertainment Expo, or more commonly known as E3, and there was some Power Rangers Megaforce goodness to be found if you headed towards the Nintendo area of the floor!

TokuNation.com member and RangerCrew.com[/url] founder Fury Diamond was in attendance and got a chance to play the game first-hand. The game is a side-scrolling adventure similar to the Power Rangers Samurai game that was released last year. Please do yourself a favor and check out the write-up that Fury Diamond spent so much time writing for more information.

The game is scheduled to release “Fall of 2013” though online retailers have it slated for November 30th.

After months of speculation, HeroTaku has uncovered the first details about two upcoming board games based on the Power Rangers franchise!

The Ranger Monopoly pieces are:

The Trivial Pursuit covers all twenty years of the franchise with 1800 questions for dedicated fans!

Both games have a suggested price tag of 39.99 and should be released this July. 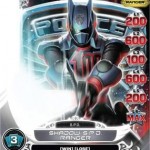 Rangercrew gives us a look at the next installment of the Power Rangers Action Card Game Series 2 Guardians of Justice set!

Check out Rangercrew’s Blog to see the full card listing! 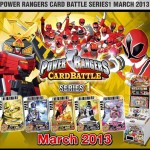 The first set of Machines will appear this month, March 2013 according to the website, and a promotional card will be given by the shop staff (while supplies last.) With this game out, many more cards will be available!

Thanks to Tokunation Member AoBlue For The Heads Up!

Our good friends over at the Rangercrew blog have uploaded some screenshots of the online Power Rangers Megaforce “Never Surrender” game, which will be playable on the Nick.com website from tomorrow!

In Never Surrender, players help their favorite rangers take on the pesky Loogies and fearsome Warstar Aliens. They can also form their own teams of two by choosing the ranger they wish to play with; from there they’ll battle their way through waves of oncoming enemies in familiar environments from the show. Each ranger has their own specialized combo attacks, augmented attacks and a team up Megaforce attack – along the way, players collect Gosei coins in order to redeem Megaforce Power Cards that grant their rangers enhanced weapon and elemental abilities.

As well as a gallery of screenshots from the game (which you can view after the jump), Rangercrew have also uploaded a promotional video which we’ve linked for you below; 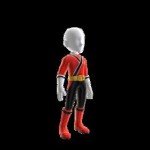 Tokunation.com user Shinken Red let us know that you now have the ability to purchase your favorite Power Rangers Samurai spandex and helmets for use on your X-Box Live Avatar!

Currently for sale with the cost:

Interesting to note … the helmets are all regular helmets, the costumes are all regular costumes … but the Gold Ranger‘s costume is colored in black and gold, like in his Mega Mode form, but without the armor.

Dress up yourself as a Power Ranger! Click here to check out the swag!