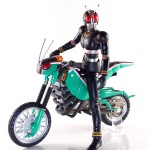 One of the most popular Showa era riders is undeniably Kamen Rider Black. Heralded as one of the best rider shows out there is it any wonder Bandai finally decided to give collectors a better alternative to owning Black? The original S.H. Figuarts releases of both Black & Battle Hopper, while fine for their time, have been outshined since by far far better figures. So to rectify this situation Bandai released a new Black & Battle Hoppper as the first in a line of Kamen Rider Renewals!

The short of it is that these two figures are fantastically better than their original counterparts, but to find out why you should check out our full review and gallery after the jump. Just click “Discuss on the TokuNation Forums” at the bottom of this post to be taken to the full gallery and review thread.

This segment will be back in two weeks with a very special gallery of S.H. Figuarts Kamen Rider Black RX Renewal & Acrobatter Renewal! 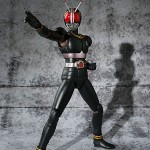 We brought you the reveal of these new figures, we brought you the first official images, and now we bring you a plethora of official photos for both S.H. Figuarts Kamen Rider Black Renewal & Battle Hopper Renewal!

Black and Battle Hopper are slated for October release (with some pre-orders going live tonight at Amiami) and priced at 3500 & 4500 yen respectively!

And don’t forget the reissue of S.H. Figuarts Shadowmoon that’s accompanying these new figures, also in October for 3360 yen.

Earlier today we brought you reveals of S.H. Figuarts Kamen Rider Black & Battle Hopper Renewal Versions as well as a planned reissue for Shadow Moon. Just as quickly as these were announced 1 official photo each for Black and Battle Hopper have surfaced, as well as pricing info and release dates!

S.H. Figuarts Battle Hopper (Renewal Ver) will be released in October for 4500.

Both figures will be standard release NOT Tamashii Web Exclusives. 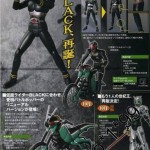 A scan has come out revealing the long rumored Kamen Rider Black 2.0 is happening! along side it seems a reissue of Shadow Moon will be happening as well as a brand new Battle Hopper!

If I am reading the page right they will be coming out in October of this year!