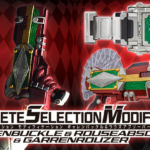 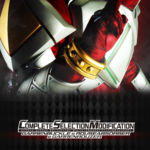 At the moment, we don’t have much info to go on other than the fact that you can buy both the buckle and Rourzer together in a set or individually.

The image also teases a date of March 3rd 2020, so do be sure to check back with us then and hopefully, more info will be revealed. 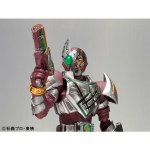 As speculated Broken Garren features a bit of a toned down color scheme, opting for more of a burnt red than a bright magenta. It does of course feature the new Broken “battle damaged” head. But surprisingly this figure also features a battle damaged chest! Garren also includes several sets of additional hands, his trademark sidearm the Garren Rouzer, and his Rouze Cards in splayed out form as an effect piece for the Rouzer. 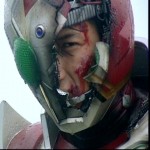 In a surprising turn of events (not really) Bandai has found at least one more way to milk a little money out of Kamen Rider Blade fans. Revealed thanks to Shishioh we have confirmation of an upcoming Toei Hero Net Exclusive figuart!

S.H. Figuarts Kamen Rider Garren Broken Head Ver. is set for release in January 2016 for 6156 yen. Though there are no images of this release currently, we can expect to see them very soon. It obviously follows on from the Blade Broken Head release so it will likely feature a slightly altered color scheme in addition to the new head.

Be on the lookout for your preferred middleman to throw up orders for Garren Broken Head Ver. soon!

A form exclusive to Kamen Rider Blade’s S.I.C. Hero Saga stories & design art, Garren King Form is a gloriously ornate final form power up for fan favorite rider Tachibana. Never produced in toy form before, Garren King is based on the Giraffa Beetle Undead. The production of this figure depended directly on the sales of the previously released Leangle Jack Form, so it would appear that was ultimately a successful figure.

S.I.C. Garren King Form includes his massively powered up King Garren Rouzer, 6 additional hands, and a splayed deck of Undead Cards for the Rouzer. Look for Garren to be released in January for 8316 yen! 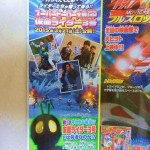 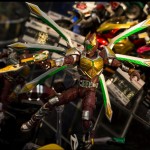 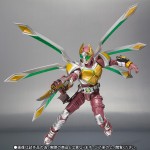 Revealed last week thanks to the latest toy magazine scans, Kamen Rider Garren Jack Form will soon be appearing in the S.H. Figuarts line as a Tamashii Web Exclusive! This powered up form of the Kamen Rider Blade rider will come packaged with alternate hands, the Jack-enhanced Garren Rouzer and deployment parts for the Rouzer.

Preorders for the figure open tomorrow, with the figure due for release in July. Garren Jack Form is priced 4644 yen.