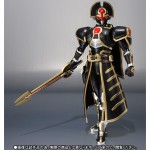 S.H. Figuarts Kamen Rider Orga will be released in February 2016 as a Tamashii Web Exclusive for 5184 yen. 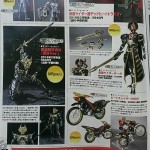 Add another few new reveals to tonight’s round of Figure Oh scans! Up this time is a trio of release!

S.H. Figuarts Garo (Ryuga). The main hero of Garo The One Who Shines in the Darkness, Ryuga will be the first new Garo entry into the S.H. Figuarts line in many years. Seemingly out of the norm from the Makai Kado releases of the last several shows. Ryuga is set for February release as a Tamashii Web Exclusive for 5940 yen.

S.H. Figuarts Kamen Rider Orga is another long abandoned figure we’ve seen on display at several Tamashii Nations events over the years. But it looks like Bandai has finally decided to dust this one off for release. And much like Ryuga above it will be a Tamashii Web Exclusive in February, 5184 yen.

Last but not least we have the second of Kamen Rider Kuuga’s bikes, the S.H. Figuarts Beat Chaser 2000! Beat Chaser looks to be another solid vehicle release from Bandai though we’re sure this one will be lite on the accessories. The Beat Chaser 2000 is set for release in January and as has been the trend tonight it will be a Tamashii Web Exclusive. Retail is 4968 yen.

First seen at Tamashii Nations a few weeks ago, this group shot all but completes the cast of “Kamen Rider Faiz” in Figuarts form!

Sadly no prices or release dates are yet confirmed but please stay tuned to this page for further details! :)

As the pictures start rolling in from Bandai’s 5th Anniversary Tamashii Nations event, online retailer Amiami have also begun extensive coverage via their Facebook page, as have hobby blog CyberGundam. On show are a variety of figures for the SH Figuarts line that should please both Kamen Rider and Super Sentai fans alike!

Among the displays was an extensive Kamen Rider Fourze setup, which featured all the figures release/to be released, including all 12 Zodiarts! The downside is, aside from Sagittarius all newly revealed Zodiarts look to be non-posable Figuarts Zero figures.

Next up is the “Legend of Masked Rider” display, which included Riderman, Tackle, Kamen Rider X, Apollo Geist and a Shocker Grunt among its ranks!

Also among the Kamen Rider displays is Blade, one of the highly-anticipated releases and an impressive Kamen Rider Faiz diorama including Kamen Rider Psyga!

The ENTIRE cast of Kamen Rider Ryuki is on display at the Festival, complete with Advent Beasts!

Rounding off the characters we have Kamen Rider Wizard in Flame, Land, Hurricane and Water styles!

Metal Hero furthers its transition to Figuarts with Gavan Type-G, Shaider and Sharivan on display!

Finally on the Super Sentai things we have the reappearance of the long awaited Tyranno Ranger/Mighty Morphin’ Red Ranger, who recently made his debut at New York Comic Con a few weeks ago. Topping off this reveal was probably the most anticipated Zyu team member, Figuarts DragonRanger!

Alongside this was also a Go-Busters display, however this did not include any newly announced figures. Finally, Akibaranger also added a few new figures to its ranks – as well as the previously revealed Malshina, Delu Knight and Aoi-tan were also seen!

Check out the full image gallery after the jump, and discuss other non-toku figuart reveals (including Sailor Moon, Code Geass and more) over at our dedicated discussion thread. Keep checking TokuNation.com for more updates from the event!