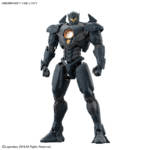 For those that may enjoy a little DIY in their hobbies, Pacific Rim Uprising is the latest series to join Bandai’s fantastic line of High Grade 1/144 model kits, with the latest images and release info having been released for High-Grade Gypsy Avenger, Obsidian Fury, and Bracer Phoenix the first three Jaegers to receive this treatment.

These three kits should provide a good alternative for those that can’t afford to buy the Robot Damashii versions of these designs.