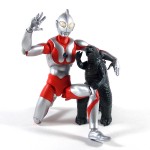 We are just 1 week away from the release of the highly anticipated Godzilla 2014 film. So of course TokuNation would like to take another look at the merchandise released so far to celebrate this movie. And this piece of merch is indeed special!

You may recall that on December 28th 2013 we reported on the existence of this Light & Sound Godzilla kit. You may also have noticed that at the request of Warner Bros/Legendary on the same day, the leaked images of this figure were removed from our site. This hilarious incident has forever re-branded this figure as Cease & Desist Godzilla around the staff forums. It’s also known as the incident where I, first got us “lawyered”. Good times!

As for the figure, it’s a rather simple but fun piece with limited articulation but a decent light & sound gimmick. A sticker book containing various images of the new Godzilla is also included. Originally it was reported to be a mini-history book of Godzilla over the past 60 years. Sadly this is not the case in the final product

Click “Discuss on the TokuNation forums” at the bottom of this post to check out the full gallery.

Met with heavy speculation at first it appears this first official image of Godzilla 2014 Film toy merchandise might actually be real. Newsouth Books has listed a 2″ Light-Up Godzilla figure kit which includes a 60 year mini-history book of the character. Produced by Running Press, this release is very similar to the type of merchandise the company has often made for book stores and comic & specialty shops relating to such properties as Batman and Doctor Who.

So what do you think of this first official piece of Godzilla Movie merchandise? Sound off by clicking “Discuss on the Tokunation Forums” at the bottom of this post. We’ll continue to bring you every piece of Godzilla 2014 news we possibly can as we get closer to the films May 16th, 2014 release date!

NOTE!: There is a LOT of back and forth going on across the Godzilla fandom on whether or not this image is real, partly because of the embargo that Bandai has on revealing the image(s) of the new Godzilla. The product listing is most likely real – a book with a 2″ figure is something specialty retailers love to do and it’s nothing out of the ordinary. The image is what is being called in to question. Until we receive concrete “yes” or concrete “no” on this, we’ll leave the story up and let YOU decide.

UPDATE!: The image attached to the story was taken down by order of Warner Bros. We apologize for the inconvenience.