Connor McKnight could have never guessed that his teacher, Dr. Tommy Oliver, was once a Power Ranger. But after accidentally bonding with an ancient Dino Gem, becoming a Power Ranger himself with his two best friends, and facing off against the forces of an evil dinosaur mutant bent on returning Earth to the age of dinosaurs, nothing surprises him now. With power from within and the roar of the T-Rex in his heart, Connor has become the Dino Thunder Red Ranger! Protectors of the right, defenders sworn to fight, together Connor Ethan & Kira are the Power Rangers Dino Thunder!

The 3rd release from Power Rangers Dino Thunder is here! Following on from the White Ranger and Fighting Spirit Green Ranger, the Dino Thunder Red Ranger brings a bit more heroic red presence to your collection, and a ton of accessories along with it. Equipped with the Thundermax Blaster & Saber, Connor also comes with a brand new unique effect part for the saber, the Tyranno Staff, extra hands and an unmasked head based on the likeness of Connor’s actor James Napier! That’s quite the complete package for this figure.

You can check out the full gallery & review of the Lightning Collection Dino Thunder Ranger Red Ranger in the thread linked below by clicking “Discuss on the TokuNation Forums” at the bottom of this post. And remember, commenting in this gallery thread will qualify you for one (1) additional entry in our annual TOKU TOY BOX giveaway! Offical rules HERE. 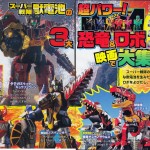 Tokumei Sentai Gobusters finally steps into the lime light with the latest magazine coverage from their up coming team up movie with Zyuden Sentai Kyoryuger. These new scans reveal that the two teams will be joining powers creating a new mecha combination: Tategami Raiden Kyoryuzin! 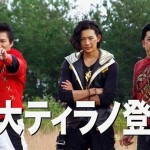 The latest teaser for the upcoming special “Kyoryuger VS Go-Busters” is now online!

This gives us our first look at returning Dino Heroes, TyrannoRanger and AbaRed! 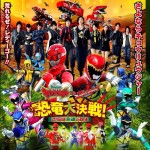 The upcoming movie coming out which has been labeled Kyoryuger vs Zyuranger vs Abaranger and oh yeah I guess GoBusters maybe too has a brand new promotional image out to continue causing your mouth to water.  It’s a pretty sweet image and we’re just going to dump it here.

Click on the ”Discuss on the Tokunation forums” link to join our on-going conversation about this upcoming movie.  We’ve seen everything from past generals from the classic shows returning to the Megazords all fighting together in one big battle at the end.  It’s exciting.  So come discuss the upcoming Kyoryuger vs GoBuster movie! 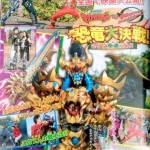 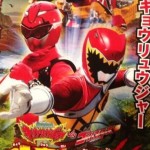