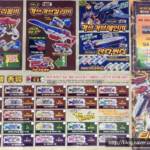 Well that’s one way to kick off Power Morphicon! Currently on the show floor at Bandai America’s booth is the Legacy Power Sword!

This impressive 1:1 scale replica of Jason/Rocky’s signature weapon has been a dream of Power Rangers collectors ever since the Legacy line started. Now we can finally say it’s happening! These leaked images from the show floor give us our very first look at this impressive piece.

As we learn more about this item’s release date & price point this weekend we’ll be sure to keep you updated! 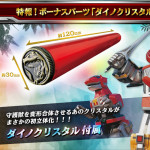 Now listed in official images is the previously mentioned Tyrannosaurs Dino Crystal! It’s a small update to an already impressive package, but a welcome one. As a nice bonus item that has never seen release in the US, the Dino Crystal helps set apart the Dino Buckler from the Bandai America Legacy Morpher just a little bit more.

The Premium Bandai exclusive Super Sentai Artisan Dino Buckler will be released in march 2016 for 4860 yen!

That time of year has rolled around once more! It’s the third annual Titanium Ranger Day! October 28th 2013 started it all when our colleagues at Rangercrew got together with Bandai Cards to help promote the Titanium Ranger with the official reveal of his Power Rangers ACG Card and a live chat with his actor Rhett Fisher!

What began as a simple day of appreciation for the character has grown to be much more than that. Not only did Titanium Ranger make his way into the ACG that year, but he was 1 of the final 5 rangers selected in Morphin Madness,  became part of the exclusive Power Morphicon 2014 Ranger Key Pack, had a 5″ Super Megaforce Legendary Ranger figure, AND made it into the finale of Power Ranger Super Megaforce!

As the first ranger ever to be solely featured in Power Rangers (Lightspeed Rescue) with no sentai counterpart for his basis, Titanium Ranger is one of the most unique creations in the entire Power Rangers franchise. Appreciation for the Titanium Ranger & Rhett Fisher himself has been on the rise for years. It’s no coincidence that the last few years have been very kind to the character. We here at TokuNation are proud to celebrate another Titanium Ranger Day!

Feel free to click “discuss on the TokuNation Forums” at the bottom of this post to join our Titanium Ranger Day discussion thread. And while you’re at it follow the handy links below to check out a hefty selection of Titanium Ranger photo galleries we’ve posted previously: 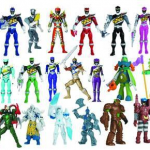 Thanks to @Rickman0804 and our friend @razzle1337 on Twitter a whole score of new toy images for the upcoming Power Rangers Dino Super Charge toy line have been revealed. A lot of these items have already been known about because of previous toy listings and some are brand new. Anything with a major spoiler we’ve added spoiler tags too as we are committed to not spoiling things for those of you who do not wish to be spoiled. Some of these are obvious because, well, Kyoryuger. Check out the highlights below and then check the pictures!

To see pictures of these toys simply click the title of the story. What do you think of these new reveals? Which ones immediately jump to the front of your list? Join in on the discussion! 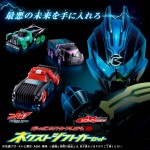 Not to be outdone by the excellent Ranger Key Set news today, Kamen Rider Drive has a Premium Bandai release coming up as well. Or rather Kamen Rider Dark Drive does! Premium Bandai has just listed a brand new Gashapon Next Shift Car Set for this summers evil movie rider!

This set includes Kamen Rider Dark Drive’s 3 trademark Shift Car; – Next Hunter, Next Deco Traveler, & Next Builder! This set will be available for order through September with a release alter this year in December. The Next Shift Car Set retails for 2592 yen. Be sure to get with your preferred middleman to secure this set today!

You may recall last year that Bandai of America had QUITE the display of Super Megazforce Ranger Keys. Well this year at their booth we’ve been treated to a huge display of current and fall releasing Dino Chargers from Power Rangers Dino Charge!

This very unique display not only includes some basic Chargers we’ve seen before but also a wide variety of brand new versions of previous chargers! New translucent plastics and metallic paint apps will be setting the fall assortments apart from earlier this year. In very much the same way Kyoryuger gave us multiple special releases of Zyudenchi. And not to be forgotten the SDCC exclusive Mighty Morphin Dino Charger set is also on display in all it’s glory!

Get ready to Charge It Up this fall with Bandai of America’s Power Rangers Dino Charge & Dino Super Charge toys!