Just over 2 weeks ago the Tamashii Nations 2014 event was held in Japan. As is always the case the event held a number of spectacular reveals for Tokusatsu and non-toku fans alike. Even after the event ended the Tamashii Features twitter account was still sending out official hi-res images for each of the items on display, in some cases giving us our first official looks at items under photo bans. Well today brings us an AVALANCHE of new images running down the list of the tokusatsu items on display that were under such bans! 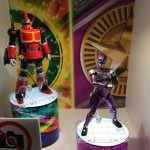 A late reveal from Tamashii Natiosn 2014 but a reveal none the less! Originally reported to be on display at the show but under a photo ban, this pair of figures had yet to be seen by the larger public. Well no more! Thanks to the sleuthy picture ninjas at the show we have our first image of S.H. Figuarts Kabutack Super Mode & S.H. Figuarts Janperson!

Based on the reveals this past week, 2015 is shaping up to be the year of the Metal Hero! With the reveal of Robotack & Janperson we inch closer and closer. Kabutack is the titular hero of B-Robo kabutack & Janperson of course hails from Tokusou Robo Janperson. Granted these are just prototypes without release dates but as an avid Metal Hero fan this is exciting news. 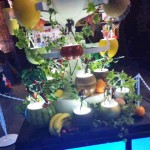 As is usual with these larger Tamashii events there’s a photo ban in place on a select group of items at Tamashii Nations 2014. For whatever reasons there’s always a selection of figures at these thing you just can’t take pictures of. Generally they’re off in their own areas of the show but eventually someone sneaks camera shots of what’s in there. For now at least there are no pictures or at least no decent ones of quite a few more things than we realized.

Before the show began Bandai aired a 30 minute livestream video in which a slideshow contained images of the Gaim & Drive displays. But thus far that’s all we had to go on. The list below confirms much of what could be made out in those images and includes several more we were unaware of. Here’s the full rundown of what IS at the show but can’t be photographed:

Updated with at least 1 image from the Kamen Rider Gaim display!

That so far is all the yet to be pictured items that we know are physically at the show. That’s quite a lot of stuff. Frankly the grainy images we have seen show that the Gaim & Drive displays are huge and full of figures, really great set pieces. It would seem silly for the photo ban on those sets up to last through out the show. And the two additional Metal Heroes would be welcome among the numerous other fresh reveals yesterday. We’ll keep you posted if images for anything on this list turn up from the event.

However that’s not all! As a part of this set 2 more mystery keys will be released! One from Kakuranger and one from Abaranger. The most likely guess for each is Ninjaman for Kakuranger since he never had a ranger key before and possibly Abare Pink since her key was featured briefly in an episode of Gokaiger. The price for this set is 10,500 yen, so Ranger Key Completionists get ready!

Earlier this year, we posted a picture featuring Gavan Type-G standing amongst his fellow Metal Heroes- Janperson, Jiraiya, Jiban, SyncRedder, B-Fighter’s Blue Beet and Kabuto. Well, new scans shown reveal that they may not be the actual Metal Heroes after all…but the Gokaigers transformed into them using the Metal Hero Ranger Keys!

Does this mean we may get another Movie Ranger Key release like the OOO Key Set during the run of Super Hero Taisen last year? Only time will tell!

Source: Toy-World.com.hk Thanks to user conundrum for the heads up!

A magazine scan has appeared online that shows several Metal Heroes of the Past Alongside Gavan! They are (in the upper right corner of the image):
Janperson, Jiraiya, Jiban, SyncRedder, B-Fighter’s Blue Beet and Kabuto.

More Metal Heroes Join The Fight! What role will they play in the film?

Thanks to Tokunation Member DrillBIT for the heads up!