Featuring the antics of DekaRed, Gavan, and Kamen Rider W teaming up, Den-O’s Urataros dating Battle Fever J’s Miss America, Stronger and Tackle living together as a married couple and other hilarious shorts.

The trailer can be seen in the link below:

And while the Gokaigers are returning for this installment of Super Hero Taisen, it’s sadly been confirmed that it’ll only be in voice only, with Ryota Ozawa reprising his role as Captain Marvelous. Ayumi Kinoshinta(AKA:Jasime/DekaYellow) and Kohki Okada will also reprise their roles as Skydain and Groundain respectively.

Lastly, Toei’s official site for the film has also been updated giving a brief history of the Metal Hero franchise.

Earlier this year, we posted a picture featuring Gavan Type-G standing amongst his fellow Metal Heroes- Janperson, Jiraiya, Jiban, SyncRedder, B-Fighter’s Blue Beet and Kabuto. Well, new scans shown reveal that they may not be the actual Metal Heroes after all…but the Gokaigers transformed into them using the Metal Hero Ranger Keys!

Does this mean we may get another Movie Ranger Key release like the OOO Key Set during the run of Super Hero Taisen last year? Only time will tell!

Source: Toy-World.com.hk Thanks to user conundrum for the heads up!

Yesterday DecaEnd of HJU reported on the appearance of a Tsuburaya character in Toeis’ upcoming Super Hero Taisen Z Net Movies. Tsuburaya being the parent company of the Ultraman Franchise it’s safe to say we’ll see at least one Ultra appear.

When Orends Range reported this news it was pointed out by a user there (Shogeco) that if you look closely at the SHTZ Net Movies Site there’s a small copyright on the page for Marvel Comics! Could this mean the return of the 70’s Japanese toku hero Spider-Man? Time will tell!

A new set of magazine scans made the rounds a few days back featuring the Combination of Kyoryuzin & Wizardragon in Super hero Taisen Z. Today an additional scan from the same magazine has revealed another new one off special combo, this time featuring the mecha of Space Sheriff’s Gavan, Sharivan, and Shaider!

Revealed today this combination utilizes Sharivans’ robot Grandbirth, holding Shaiders’ Vavilos robot in gun mode, while Gavans’ Dol Dragon rides on top of it breathing fire! This special final combo of the 3 most iconic Metal Heroes mecha will execute the Big Grand Fire attack presumably in the finale of the film in space while the the Kyoryugers and Wizard exectue the Brave Strike End back on Earth.

While many were recently fooled by a fake image of a unique mecha combination for the movie, these scans confirm that Kyoryuzin and the WizarDragon will be able to combine using the power of the Super Sentai and Miracle Rings. This combination gives Kyoryuzin the ability to use the Zyuden Brave Strike End kick!

In other news Kyoryu Gold will appear in the film, teaming up with Kamen Rider Beast. The scans also include team up images of Wizard, Kyoryu Red, Beast and Yellow Buster teaming up against Space Shocker enemies.

Super Hero Taisen Z will premiere in Japanese cinemas on April 27. Check out the full sized images after the jump! 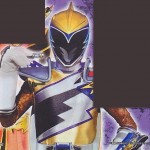 We must be getting pretty close to the in show reveal of Kyoryugold because an image with a clear look at the costume has finally surfaced! Zyuden Sentai Kyoryuger’s 7th ranger so far has been rumored to be Torin himself but right now that rumor is unconfirmed. Oddly there appears to be an image of Magired blacked out behind Kyoryugold. Is that a clue that we may get another Magiranger alum in sentai ala Beet Buster? Possible.

Some new Super Hero Taisen Z images also tease us. One image in particular features Tokusou Sentau Dekaranger, Choushinsei Flashman, Kamen Riders Meteor & Fourze, Space Sheriff Gavan, and Kamen Rider Super-1. And of course what would a team up movie be without the plot device/hole that is Kamen Rider Decade? Who isn’t really space themed.

*Sota Fukushi is back once again as Kamen Rider Fourze

*Tetsu Inada will play the voice of Kamen Rider #1

With the release date of Kamen Rider × Super Sentai × Space Sheriff: Super Hero Taisen Z drawing closer, more Japanese movie websites have been posting news about the cast that will be appearing, along with new images from the film itself. Thanks to the guys over at Henshin Justice Unlimited, who’ve organised the cast list, we can see what characters will be the main starS of the film! They are:

As expected, the remaining four Kyoryugers will appear in the film as will Kosuke Nitoh/Kamen Rider Beast, Koyomi, Rinko, Shunpei and Shingo from Kamen Rider Wizard.

Go-Busters fans will be pleased to see that this contradicts earlier news that Yellow Buster would be the only one returning for the film. Super Hero Taisen Z will be released in Japanese cinemas April 27th.

Thanks to the efforts of Henshin Justice Unlimited, we have a translation of the promotional pamphlet for the forthcoming Kamen Rider x Super Sentai x Space Sheriff: Super Hero Taisen Z! This pamphlet includes a selection of new images, along with a brief summary of the film.

To keep this news post spoiler-free, we’ve included the summary in the next post. You can see it, along with the new images, after the jump!