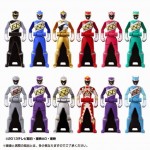 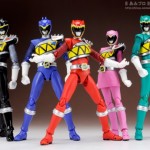 To help promote the up coming release of the S.H.Figuarts Kyoryugers, AmiAmi’s posted a couple photos of some unreleased figures including ones for Kyoryu Pink and Kyoryu Black. Make the jump and check them out if you’re still on the fence.

Thus far, we know that Kyoryu Green and Blue will be getting released in a two pack, and Gold will be getting a stand alone release it still isn’t clear how Black and Pink will be released.

Thanks to Tokunation Member Optics for finding these photos!

A preview in the Akiba Showroom has given us our first look at all five Kyoryuger Figuarts!

Kyoryu Red will be out in October, Blue & Green will be released as a 2-pack in February, and release dates for Pink & Black are not yet confirmed (though its believed they will also be packed together).

Sadly no details for Gold, Violet, Cyan and Grey are available at this time. 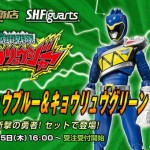 You read it right folks! Tamashii Nations has revealed an image showing the main 5 Kyoryugers all together! And they have also revealed the first two-pack of the group, KyoryuBlue and KyoryuGreen!

Both will have their GabuRevolvers, GaburiCaliburs, Zyudenchis and Armed On Accessories. Pre-orders open on July 25th and they are Tamashii Web Exclusives priced at 7350 Yen, and are expected for a release date of Febuary 2014.

Thanks to user OPTICS for the heads up! Edit: Further reading indicates a bonus part of the Kentrospiker, or perhaps the full Kentrospiker itself!

The official Toei Youtube channel as uploaded a promotional video for a Zyuden Sentai Kyoryuger & Super Sentai Dinosaur Encyclopedia DVD special. This DVD will be given away with the June issue of Televi-kun magazine.

The DVD will feature a guide to the Kyoryugers, their arsenal, beast batteries and partners. All included will be information on the dinosaurs of past Super Sentai series!

Check out the promo below

Thanks to Orends range for sharing!

Thanks to Youtube user 0311bountyhunter we have our first full look at the Zyuden Sentai Kyoryuger opening theme and video! Vamola Kyoryuger is sung by newcomer artist Kamato Shogo. An upbeat, fun, and powerful theme, Vamola has set the tone for this series about brave and strong heroes.

The Kyoryugers are here to protect the world from the Devos Army with their Zyudenchi! Brave 1 premiered today in Japan so the usual fansub groups will have their releases of this episode in the next few days. Whether you see the raw or the sub be sure to chime into our Kyoryuger Brave 1: “Let’s go! The Bright Red King!” Discussion thread! 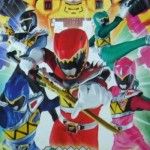 Thanks to forum member Christian Prime for pointing us to the official Toei Youtube channel for a brand new look at Juuden Sentai Kyoryuger! This video showcases the Kyoryugers in actual action using their Gaburevolvers, we get our first look at them pre-henshin, and we get in action shots of the big dino himself Kyoryujin!

This is out first look at the Kyoryuger suits in action, first seen as a promo to coincide with the Go-Busters’ stage show.

Expect more video along with the Kyoryugers’ debut in the VS special later this month!

With thanks to member xSkullheartx

Courtesy of modxtoy we bring you a huge selection of Super Sentai images from the February issue of Japan’s Hyper Hobby magazine!

Among the magazine scans are images of the latest Super Sentai team, the Jyuden Sentai Kyoryuger, as well as shots from the forthcoming Tokumei Sentai Go-Busters vs. Gokaiger movie and an extensive chart of the Ranger Key toys that have been released.

After continued speculation and rumor, the first image of next years’ unmorphed Super Sentai team is now online!

Stay tuned to this space for further details about the Kyoryuger Crew. :)