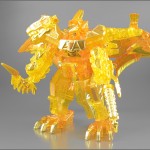 The original minipla fiend himself, Moonbasetom, is at it again with this gallery of Minipla Raiden Kyoryuzin Lightning Brave Finish Version from Zyuden Sentai Kyoryuger!

This kit represents Raiden Kyoryuzin just at the moment it uses the  Lighting Brave Finish attack. Hence the very awesome mix of orange and yellow translucent plastics to replicate the energy of the attack. As with all of these special multi-box premium minipla sets, some awesome gold foil labels are also included to really spice up the kit. This set was originally a Bandai Premium Webshop exclusive released last month for 3675 yen. Check your favorite secondary retailers now to find this set!

Click “Discuss on the TokuNation Forums” at the bottom of this post to see the FULL gallery of this set as well. 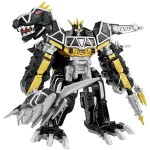 GABURINCHO! A release this month that everybody is excited about is the DX Zyuden Sentai Kyoryuger Kamitsuki Gattai Kyoryujin Dark Version, a fusion of the 3 dark versions of Gabutyra, Stegochi and Dricera!

Youtube user wotakufighter/ヲタファ has put up a review of the dark dinos! Watch it here! (Although he doesn’t demo the 3 Deboss Batteries, he does demo the unique Sentai battery that was part of this release.)

This special set includes Gabutyra, Stegotchi, Dricera and Pteragordon molded in translucent gold plastic, with all the stickers replaced by new gold foil stickers. It is priced 3675 yen, and will be released in January 2014.

This is a web exclusive item, so anyone interested will need to get their orders in with one of the many reputable middlemen available. Check out a full image gallery of the kit after the jump!

The final DX mecha for Zyuden Sentai Kyoryuger, the mighty Bragigas, won’t be out until October. But we’ve just gotten an early look at Bragigas, his robot mode Gigant Bragioh, and his combined form Gigant Kyoryuzin at Tokyo Toy Fair!

Not to be outdone by the reveal of Tobaspino we’ve received yet another set of Kyoryuger toy catalougue scans! This time we have our very first look at Zyudenryu #9 Pleson in it’s semi-dino/rocket ship mode, as well as it’s own robot mode PlesOh!

AND we have our first look at Pleson’s combination with Gabutyra and Bunpachy, Bakuretsu Kyoryuzin! This combo features an almost centaur like appearance with Gabutyra’s torso pointed forward (as in T-Rex mode) and Pleson riding atop him. Bunpachy makes up the left arm while the forward section of Pleson’s vehicle mode makes up the right. Truly an awesome and interesting combination to behold!

Edit: And thanks to DrillBit, we have an image of KyoryuRed’s upgrade form, KyoryuRed Carnival!

It’s that time once again! New toy catalogues for Zyuden Sentai Kyoryuger will be out later this month, and with the reveals in them looming we have a few advance rumors of what we’ll see.

– Last but not least Kyoryu Red will be receiving a personal power-up. He will receive a new gun modeled after Gabutyra called the Gabutyra Dokanival. (Dokanival being a play on the word for boom and carnival). When the Dokanival is combined with the Gaburevolver he becomes Kyoryu Red Carnival!

As always remember to take rumors with a grain of salt. In this case several. But none the less, true or not, these are some exciting rumors indeed!
Gaburincho!

While many were recently fooled by a fake image of a unique mecha combination for the movie, these scans confirm that Kyoryuzin and the WizarDragon will be able to combine using the power of the Super Sentai and Miracle Rings. This combination gives Kyoryuzin the ability to use the Zyuden Brave Strike End kick!

In other news Kyoryu Gold will appear in the film, teaming up with Kamen Rider Beast. The scans also include team up images of Wizard, Kyoryu Red, Beast and Yellow Buster teaming up against Space Shocker enemies.

Super Hero Taisen Z will premiere in Japanese cinemas on April 27. Check out the full sized images after the jump!

Thanks to a user on Hatena Diary we have an EXTENSIVE look at the new minpla Kyoryuzin from Zyuden Sentai Kyoryuger! We’ve been provided with boxed, pre-build, full build, and mid transformation shots alike. Unfortunately it looks like some liberties had to be taken with Kyoryuzins’ design to achieve this figure, such as the removal of the Zyudenchi (beast batteires) from the design. Instead Gabutyra has permanently fixed black cylinders under his chin and tail which act as arm connectors.

We’ve hosted a selection of the images from this set here. Click the link to go and check out the full, and massive, image gallery of this latest minipla release!

Gabutyra’s body will come in two separate boxes while Dricera and Stegochi will be packed in single contained boxs.

Minipla Kyoryujin will be shipping sometime in late March retailing for a very wallet friendly price of 2940, a great alternative to those who can’t afford the DX!

Thanks to Tokunation member Gryphman for the heads up!