News broke today that the Power Rangers comic book license is apparently up for grabs. Originally held by PaperCutZ, the publisher released books from Power Rangers Super Samurai and Power Rangers Megaforce, along with a hotly debated couple issues of Mighty Morphin Power Rangers (hotly debated because many fans found them to be poorly written and riddled with errors – most notably the Free Comic Book Day issue). This news was broken by one of the artists on the book, Jolyon Yates, who shared on his personal website unpublished pages from Mighty Morphin Power Rangers, stating that everything is in publishing limbo as the rights to publish the books are now up in the air.

With a movie coming out in 2017 and some concept images that leaked from said movie creating quite a stir, our thoughts are that Saban Brands would want to get Power Rangers back in to the comic world where comic book and comic book movies are now all the rage. Linked to this story is a poll where we ask you who should get the license to publish Power Rangers comic books/graphic novels, as well as our own thoughts on the likelihood of each company.

Our honest opinion? We’d like to see IDW Publishing take the helm. With their success record with Transformers, Godzilla, Teenage Mutant Ninja Turtles, Ghostbusters, Star Trek, My Little Pony (the list goes on) they could easily turn it in to a big hit. Imagine two comics – one starring Power Rangers Dino Charge for the kids and one for the more adult fan simply titled Power Rangers expanding the universe and bringing back fan-favorites. What are the Silver Guardians up to? What’s happening on Aquatar and Triforia? What about the Phantom Ranger and the Blue Senturion? The possibilities are endless – just like our imaginations.

If anything breaks on what happens with the license (whether PaperCutZ is able to renew or another company takes it) we will let you know. Join in our discussion and our poll! 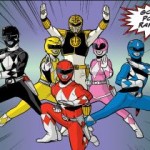 Comic books continue to be a popular medium for fans of older television shows no longer in production to continue the adventures of their favorite heroes. Thanks to Papercutz, the Mighty Morphin Power Rangers return to continue their battles against Rita Repulsa and Lord Zedd. This coming May 3rd, 2014, you can pick up a free comic starring none other than the Mighty Morphin Power Rangers! Thanks to our good friend Fury Diamond from the Samurai Cast Blog, we have our first look at the upcoming free comic book as well as his thoughts and opinions on it!

Relive the action and excitement with Jason, Zack, Billy, Trini, Kimberly, and Tommy as they morph in to action this Free Comic Book Day against Lord Zedd! See the Tigerzord ride the Rad Bug! See the Thunderzords in action as they save the world! Click here to read Fury Diamond’s review, and to see all the preview images, simply click here!

Are you planning to pick up this free comic? And are you going to be picking up Papercutz upcoming Mighty Morphin Power Rangers Issue #1 set to release this June 2014? Discuss away! 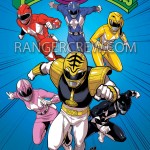 A recent tradition to both inspire new readers and to promote your product is in the now annual Free Comic Book Day.  The next annual event is scheduled to be on May 3rd, 2014 and features a number of titles being offered up for free from your favorite comic book retailers.

It’s free – are you going to grab it when you pick up your comics that day?  And how well do you think Power Rangers can transition itself in to a paper media?  Discuss!