TokuNation returns at long last with a new S.H. Figuarts Super Sentai gallery! Though releases are few and far between in recent years those that have come out have been fantastic figures to review. Today is no different as we’re taking a look at the recent Tamashii Web Exclusive 2-pack of S.H. Figuarts Vul Shark & Vul Panther from Taiyo Sentai Sun Vulcan!

When we reviewed Vul Eagle way back in December I had nothing but praise to heap upon that figure, and now I get to do the same thing, twice! S.H. Figuarts Vul Shark & Vul Panther retain all of the excellent qualities that made Vul Eagle perfect. Top notch sculpt and paint work on top of an almost perfection accessory selection make it pretty hard to not like these figures. And in a rare occurence this release officially completes the Sun Vulcan team! Granted they only had 3 (technically 4) members but it’s a rarity these days. If you haven’t picked up Vul Shark & Vul Panther yet I highly suggest it, this 2-pack will bring just a little bit more of that old school Showa class to your collection.

We’ve attached a selection of images to this post but feel free to peruse 70 images of S.H. Figuarts Vul Shark & Vul Panther as well as an in depth review. Simply click “Discuss on the TokuNation Forums” at the bottom of this post. The quick version though? Buy theses figures. And here’s to hoping that one day the Sun Vulcan villains of Black Magma may get the same excellent treatment that these heroes of the sun did. Eagle, Shark, Panther!

The Vul Shark & Panther 2-pack will be released as a Tamashii Web Exclusive set in June 2015 for 9720 yen. Each figure includes a compliment of additional hands, scarf, a Vulcan Stick, and the removable blade for the Vulcan Stick.

Several Web Exclusive middleman websites have already posted up order pages for these figures so be sure to secure your order as soon as you can! 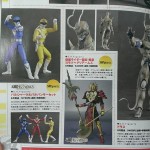 This pair is set for release as a Tamashii Web Exclusive 2-pack, costing 9720 Yen. Release is scheduled for June 2015!