We’re back, with even more photos of today’s biggest announcement from Power Morphicon 2018. The Lightning Collection Mighty Morphin White Ranger! Which has absolutely been the talk of the con since it’s debut.

Our very own @TokuChris has been struggling to get a signal to send us photos and videos. But it seems he’s finally found the sweet spot of the convention center to get us a new smattering of up close looks at the Lighting Collection White Ranger! We’ll be back a bit later one with super hi-res shots of this display prototype, as well as a massive gallery of all the props, helmets, and full ranger suits on display at Power Morphicon 2018!

Announced at Hasbro’s Power Morphicon panel earlier today, the new Lightning Collection is already shaping up to be a fantastic replacement for Bandai’s now defunct Legacy 6.5″ line of figures. This amazing new line of 6″ scale, show accurate, accessorized, and affordable ($19.99) figures is a welcome addition for collectors worldwide.

Via the official Power Rangers Twitter account, we also now have access to the video shown announcing the line at said panel. This video breakdown gives us a look at the entire construction and production process of the prototype seen at the Con today. Which was then displayed publicly by Hasbro after the show.

Our old friend @JmannDX has provided us with some new higher-res shots of the Lightning Collection White Ranger as well, attached to the story after the jump. For now, see the video above for a fantastic first look at this line and what we can hope for in the future! 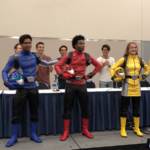 Perhaps the biggest event at Power Morphicon today is the reveal of the next generation of Power Rangers!

At long last we get to meet the faces behind Power Rangers Beast Morphers– an adaptation of the 2012 Super Sentai series Tokumei Sentai Go-Busters.

This new Ranger team consists of:

Welcome one and all to the Power Rangers family!

Power Rangers Beast Morphers will begin in 2019. Stay tuned to TokuNation as we keep you up to date on this remarkable new series! 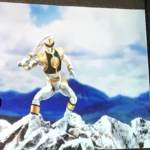 As Power Morphicon continues, the good people at HASBRO have revealed their first project utilizing the Power Rangers toy license!

Only 1 piece of the Lightning Collection is on display at the moment- the Mighty Morphin White Ranger!

The Lightning Collection will be hitting stores in Spring 2019. Figures are priced at a very modest $19.99 USD. Exact assortments are not known at this time, so stay tuned to TokuNation as we keep you up to date on this exciting new toyline!

It is time to morph in to action Power Rangers fans! It is Saturday, August 18th which means we are now in DAY TWO of the official Power Morphicon convention! If you’re a fan of Power Rangers – you should be here! Today is the big day with TWO Hasbro panels happening back to back, right near the start of the show! Obviously leaving us plenty of time to foam at the mouth for the rest of the day. Will we see the Beast Morphers cast reveal? Our Magic 8-Ball says “Yes!”.

There are a TON of panels and activities to do today and we have written up our own versions. Click “Read More” to check them out, or you can check out the official schedule by clicking here. Please note all panels, times, and guests are subject to change.

END_OF_DOCUMENT_TOKEN_TO_BE_REPLACED

This weekend is the Official Power Morphicon convention! On Friday, the show opened and fans of Power Rangers enjoyed quite a treat from the Hasbro booth – a number of show-used costumes and props from 25 years of the history. One item in particular that had a lot of interest was the prop from the series Power Rangers In Space, the Astro Megaship prop.

An older prop that has some wear and tear (missing some turrets) it is still in great condition. We took a number of photos from different angles – click the title of the story to see all the images!

Stay tuned for more high res photos from the Hasbro booth, including what’s inside the mystery box… 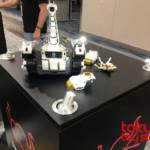 With Power Morphicon 2018 now underway, we have our first major reveal courtesy of Bandai Japan and the good people at Toku ToyStore!

At long last we have the third Soul Of Chogokin release for Mighty Morphin Power Rangers– none other than Titanus the CarrierZord! Also known as King Brachion for fans of Kyoryu Sentai ZyuRanger.

The long-necked Carrier is recreated in exquisite diecast detail- and based on previous releases should be fully compatible with the previously released DaiZyuJin and Dragon Ceaser Soul of Chogokin entries.

Sadly, price & release details for Titanus have not been revealed at time of writing. Stay tuned to TokuNation as we keep you up to date on all Power Morphicon reveals!

You can begin checking in to the convention (if you pre-registered) at 12pm! Use a photo ID and/or your printed invoice to receive all of your swag and head down to the official convention store to pick up all your pre-ordered merchandise. After that – you wait! The fun begins at 4pm PDT.

We’ve written up a brief description of the panels for Friday. Alternatively, you can also check out the official schedule by clicking here. Times, guests, and overall panels are subject to last minute changes.

END_OF_DOCUMENT_TOKEN_TO_BE_REPLACED 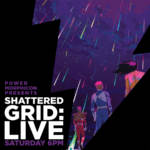