The Toei Hero MAX Magazine/Blog has posted some new details about the latest Super Sentai team-up!

*”Gokaiger VS Go-Busters will be written by Kento Shimoyama (writer of previous specials like “Shinkenger VS Goseiger”) and directed by Shibasaki Takayuki, responsible for “Kamen Rider OOO: Wonderful Shogun.”

*The early solicitations mention a “surprise guest” in this film. The 37th Sentai preview we’re expecting or something completely different?? Stay tuned and find out!! 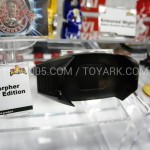 San Diego Comic Con coverage is ongoing, so stay tuned to this page for full updates on the Power Rangers panel.

A few interesting details have surfaced:

Megaforce will have two seasons-

*Goseiger will be used for the first season and

*Shout! has no control or authority to release Super Sentai on DVD

*We will see a female Red Ranger in the future no surprise to Shinkenger fans :P

Thanks to Henshin Justice for speaking with producers

This report from the ongoing licensing expo gives some unusual insight into the selection of Megaforce:

You may be wondering why Power Rangers Megaforce used Goseiger rather than Gokaiger, which was an ideal season based on the successful execution of the anniversary concepts. I wasn’t able to get a solid answer for this question. They believed that Gokaiger’s pirate theme was more focused for boys (rather than boys and girls) and the concepts of stealing and plundering were too hardcore for a young audience.

Despite a grim outlook for the Legendary Pirates, an updated report suggests more to this Sentai selection than meets the eye:

They are unable to skip a season, which makes sense because Goseiger comes before Gokaiger. Gokaiger fans will be very pleased when the time is right. Unlike the Shinkenger adaptation, Power Rangers Megaforce has gone through an extensive creative process in hopes to deliver a great product for the anniversary.

What else could this mean for future adaptations, if any??? Stay tuned as we do our best to keep you informed! :) 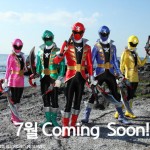 The iconic and fan-favorite 35th Super Sentai series, “Kaizoku Sentai Gokaiger” will be dubbed for a new audience in South Korea this July, under the somewhat uninspired title Power Rangers: Captain Force.

Usually a Korean launch also means a second chance at some of the harder-to-find Gokaiger toys for collectors, so keep an eye on the stores! :) 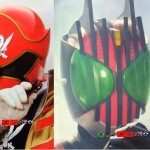 You might have expected it for a while, but now it’s confirmed!

One image depicts Gokai Red holding a Kamen Rider OOO Tajadol key, while Decade is seen holding an as yet unidentified Gosei card! Other images in the magazine include out of suit fight shots of Captain Marvelous and Tsukasa, Dai Shocker’s Crisis Fortress and Kamen Rider’s Decade, Blade and Ryuki with Gosei cards in hand.

You can check out all of the images after the jump!

Earlier this year rumours began to circulate that an interview with TOEI executive Takeyuki Suzuki in the February issue of Hyper Hobby magazine mentioned the possibility of filming brand new Legend war footage for Power Rangers’ 20th anniversary, with all pre-Zyuranger teams removed.

HH: 2012 is also the 20th anniversary of Power Rangers, isn’t it.
Suzuki: At first we got an offer from America to do something like “199 Heroes,” but of course Power Rangers started with Zyuranger, so the characters before that don’t exist. “So just get rid of those parts.” (laughs) We can’t do that either, so the discussion became “Let’s just film new footage with the 20 years’ worth that we do need.”

HH: Lately they have events even in Taiwan. In Asia, it’s not really “Power Rangers,” is it?
Suzuki: I suppose. Originally they would just broadcast the Japanese version in east Asia. They’ve been doing that in Taiwan for 7 years now. It’s not really profitable, but they wanted to try it out, so they did it. It’s gotten an unusually good reaction.

HH: So then, what are the prospects for sentai, including Power Rangers, in 2012?
Suzuki: In America it will be the 20th anniversary of Power Rangers, so they have to put forth a lot of work. In preparation for that, they asked us to “film the parts with the sentai (from Zyuranger on) in Japan.” We’re currently setting up for that.

What does this mean for the 20th anniversary of the Power Rangers franchise? Sound off your thoughts after the jump!

New Superhero Taisen poster is revealed! This time the poster features a whole lot of action, as well as Gobuster-Oh in Rocket State! 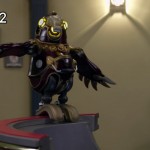 Just a quick note that we’ve put up the episode discussion threads for Pirate Sentai Gokaiger Episode 49 “The Greatest Treasure in the Universe” as well as Kamen Rider Fourze Episode 21 “The Misguidance Counseling Session”. Now that the popular subtitle websites have all the versions up and ready to download, it’s time to discuss!

See you on the boards!