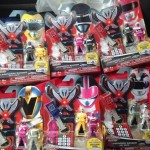 The brand new Power Rangers Super Megaforce Ranger Keys have been found at retail at Toys’R’Us. It doesn’t appear that the entire listings from earlier (check the discussion thread linked to this news post for all the new keys) have been released, but they’re beginning to trickle out. They were picked up by @davidjscalea on Instagram.

Happy hunting! Be sure to post your findings in our Sightings Forum, which is broken up by state. Help keep your fellow collectors happy!

Yesterday, images of brand new Ranger Keys were unearthed by our friends at RangerCrew.com. This follows up with statements from Bandai America at this year’s Toy Fair stating that they would find out what was going on with the remaining Ranger Keys upon returning to their offices after the event. Some of these are really exciting to see – especially a certain American-Made Power Ranger yet to see retail outside of a convention exclusive release!  These new Ranger Key sets are as follows:

For many fans this will come as a big breath of relief as we will finally have many, many teams completed. However, we would like to point out that there are still a few Ranger Keys missing. The list below details all the remaining Power Rangers that have appeared on screen, despite how little air time they may have received.  Except for Boom.  Because come on, that was a dream sequence!

We have reached out to our contacts at Bandai America in hopes of getting more details on the authenticity of these (although we assume they are legit) images, as well as a possible release date and the status of the keys that would be missing listed above. Stay tuned!

Premium Bandai has been on a Ranger Key kick this year with announcements of sets like the Sentai Lost Legend & ToQger Rainbow keys. Today brings yet another awesome reveal with the introduction of the Ranger Key EX Metal Heroes Edition Set!

This incredible new set will contain the primary Metal Hero of every series fromg Uchuu Keiji Gavan up through Blue Swat! A premium set of Metal Hero key previously released in conjunction with Super Hero Taisen Z contains the other lead heroes absent from this set. The following are included:

Curiosuly that’s yet another set of Metal Hero keys where Toei has conveniently forgotten the final 2 series of the franchise. B-Robo Kabutack, which shared a crossover with both B-Fightes. And the follow-up to Kabutack, Tetsuwan Tantei Robotack. Perhaps those keys will be released eventually. For now the EX Metal Hero Key set will retail for 13,500 yen and be released in February!

That time of year has rolled around once more! It’s the third annual Titanium Ranger Day! October 28th 2013 started it all when our colleagues at Rangercrew got together with Bandai Cards to help promote the Titanium Ranger with the official reveal of his Power Rangers ACG Card and a live chat with his actor Rhett Fisher!

What began as a simple day of appreciation for the character has grown to be much more than that. Not only did Titanium Ranger make his way into the ACG that year, but he was 1 of the final 5 rangers selected in Morphin Madness,  became part of the exclusive Power Morphicon 2014 Ranger Key Pack, had a 5″ Super Megaforce Legendary Ranger figure, AND made it into the finale of Power Ranger Super Megaforce!

As the first ranger ever to be solely featured in Power Rangers (Lightspeed Rescue) with no sentai counterpart for his basis, Titanium Ranger is one of the most unique creations in the entire Power Rangers franchise. Appreciation for the Titanium Ranger & Rhett Fisher himself has been on the rise for years. It’s no coincidence that the last few years have been very kind to the character. We here at TokuNation are proud to celebrate another Titanium Ranger Day!

Feel free to click “discuss on the TokuNation Forums” at the bottom of this post to join our Titanium Ranger Day discussion thread. And while you’re at it follow the handy links below to check out a hefty selection of Titanium Ranger photo galleries we’ve posted previously:

Our very own Sentai Tamashii is attending New York Comic Con 2015 and had some time to sit down with Greg Mitchell from Bandai America. We had asked on our @TokuNation Twitter account for some of the questions you guys had for Bandai America, as well as some of our own.

We asked around 12 questions and got answers for pretty much all of them!  More Ranger Keys … we remind them which ones not to forget (and it looks like they almost did!).  A 5″ Talon Ranger figure?  Why does the Legacy line continue to rise in price – especially that $80 Falonzord?  And does the Legacy Thunder Megazord have that attack sled formation?  We got the answers!  Click on “Read More” to read our Q&A!

END_OF_DOCUMENT_TOKEN_TO_BE_REPLACED

And boy do they mean it when they say rainbow. This massive set contains a whopping 40 individual Ranger Keys! These keys make up the totality of every single version of the 7 ToQgers that ever appeared on screen, even the recent addition ToQ-7! Every Line Change, even 0‘s & -100, all 5 Galaxy Line SOS Movie ToQgers, Dark ToQ-1, & even Rainbow ToQ-1 are ALL represented in this set! A special Ranger Key sound box with new voice clips recorded by Kappei Yamaguchi is also included to use these keys.

Now here’s the bad news, this massive and amazing set carries a heavy price tag, 29,999 yen. Is this something you’d be interested in? The ultimate set for the ultimate completionist? Let us know in the comments below! And if you want one of the Rainbow Edition ToQger Ranger Key sets we suggest you get with your middleman ASAP! 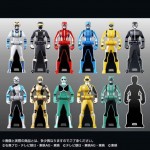 Teased mere days ago Premium Bandai has officially revealed the DX Lost Legend Ranger Keys set from Kaizoku Sentai Gokaiger! This incredible new set contains a number of characters and keys that have never been released before for one-off and obscure heroes from the through out the franchise!

That’s the 2 extra rangers from Dekaranger, the 10 Years After evil alias of Hurricane Red, the ENTIRE team from Tokumei Sentai Go-Busters VS Dobutsu Sentai Go-Busters, the 6th Goseiger whom we’ve only ever partially seen, AND the original 6th hero himself, X1 Mask!  And on top of these we have the first official teaser of Ressha Sentai ToQger Ranger Keys as well!

Be sure to get with your middleman ASAP to secure an order for this premium set! 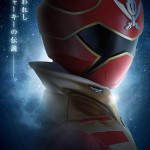 In a rather surprise announcement, Premium Bandai just launched a new web page with a teaser featuring Gokai Red from Kaizoku Sentai Gokaiger.

Based on available translations from their tweets this appears to be a “Lost Ranger Key Legend” set. What exactly that means is unclear currently. But it may imply that the various extra heroes and minor one-off rangers of the franchise, who didn’t quite make the cut in this toyline the first time, could be getting the Premium key treatment? Or maybe it’s an artisan rendition of the Mobirates itself? It’s any number of possibilities!

For now that’s all we have to go on but we’ll keep you up to date as more news becomes available. Specifically on August 7th when the reveal of more information on this set will occur!